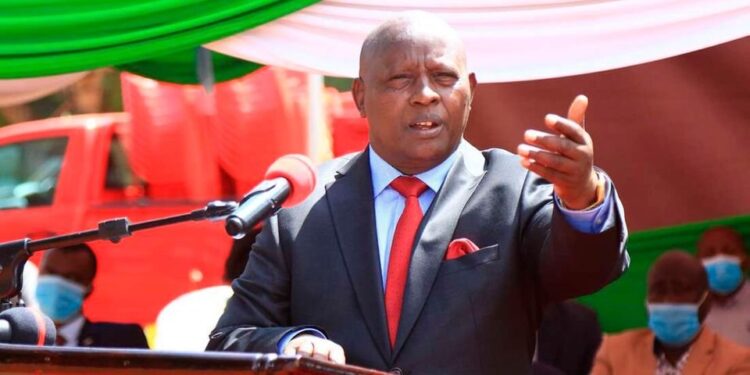 Governor Kahiga says Mt. Kenya will not succumb to blackmail.Photo/Courtesy

Nyeri governor Mutahi Kahiga has warned that the Mt. Kenya region will not be undermined in the Kenya Kwanza coalition.

Kahiga has warned of insincerity which he says has started to manifest itself in the ruling coalition.

The governor noted the happenings during the EALA elections as an example of the insincerity.

Kahia alleges that the deceit in Kenya Kwanza made Mt Kenya UDA MPs elect former Kieni MP Kanini Kega to EALA despite him being from rival Azimio-One Kenya Coalition.

“We want to say that we will walk this journey together if possible. But we want to make it clear we have not been married by anyone who thinks that they can solely decide to take us here or there.”

He has  warned that partners in Kenya Kwanza should not take Mt. Kenya region for granted.

“It is very early in this marriage but we want say that the signs are very telling,” he added.

Also Read: Ruto: All Primary Schools will Have Internet by 2030

On Friday, Deputy President Rigathi Gachagua revealed that he lobbied Kenya Kwanza lawmakers from Mt Kenya to vote for Kega.

While addressing mourners in Tharaka Nithi County, the DP disclosed that he supported Kega despite his political affiliation to prove that he had forgiven his opponents.

Gachagua also insisted on uniting the Mt Kenya region as he sought to succeed former President Uhuru Kenyatta as the region’s kingpin.

Nyota Ndogo Asks Kenyan Artists to Love, Check Up on Each Other Following Lypso's Death