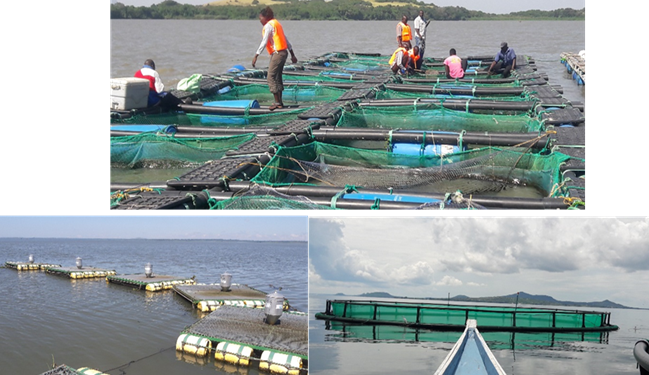 With the dwindling fish stocks in Lake Victoria, fishermen who solely depend on fishing as a livelihood have been forced to devise ways of staying afloat.

Fishing ponds and hatcheries  have become a common site on farms adjacent to the shores of Lake Victoria as fishermen try to keep the lake alive through restocking.

“The Lake was running empty and hundreds of fishermen especially those who are  not innovative  were rendered jobless, “said Tom Ojode, a fisher at Kagwar beach in Siaya county.

Available data from the Kenya Marine and Fisheries Research Institute( KMFRI), shows that tilapia catch in the lake had declined by a whopping 93% in a period of 25 years. According to the KMFRI data, by 2015 Lake Victoria was registering a paltry 3,203 metric tonnes of Tilapia catch annually down from 46,941 metric tonnes in 1991.

The decline in Lake Victoria marine stock is being blamed on   over-fishing, use of banned over and under size nets  and pollution.

Un-monitored and uncontrolled fishing opened room for illegal fishermen to carry out fishing within areas where fishing is prohibited like breeding zones, shallow waters, close to the beaches as well as at the points where rivers enter the lake. All these also contributed to the reduction in stock levels.

As a measure to address the rapidly  dipping  stock in the Lake, over the past years, aquaculture  farms and individual fishermen have resorted to cage fishing which is  becoming synonymous with the fishing value chain  of Lake Victoria.

Through  cooperative societies, small holder fishermen are pulling resources together to invest in cage fishing, which is being termed as a ‘gold mine inside the lake’. Individual farmers as well as fishing companies have also pumped billions of shillings into the lucrative business.

Nick Owiti is among a group of fishermen who ventured  into cage fishing at Dunga Beach in Kisumu.

“It  reached a point where we could venture into the lake for a whole night and come back with empty nets .There was no catch, but caging has saved the situation,” said Owiti

Owiti and his colleagues have  20 cages at the Dunga beach site. They installed the cages with  support from a local financial institution.

According to Owiti,  cage fishing is a worthy investment that is helping turn round the fortunes of the Lake.

“Cage fishing is the only solution to the declining numbers. I do not regret investing in it,” said Owiti, who owns two cages under the cooperative .

Kisumu county fisheries officer Susan Adhiambo agrees that fishing activities are more vibrant in sites where cages have been installed compared to the open waters where traditional fishing is still being done.

The Numbers and the solution

Maurice Ongowe, the Secretary of Dunga Fishermen’s Co-operative Society says that  a standard  cage    measuring 5m long and 3m deep has the capacity of holding a maximum of 6000 Tilapia fingerlings.

“With an average  cage producing close to 5000 fish in 8 months then it means Lake Victoria alone can satisfy Kenya’s demand  if we can fully adopt cage fishing,” Ongowe said.

“Because we have several cages, it allows us to monitor our fishing patterns. When one cage is ready for harvesting, the other one is providing a breeding ground, the second one is holding fish that are near maturity,”

“This has helped us deal with the issue of over fishing and fishing of immature stock which  has largely been blamed for the declining fish stocks in the open waters,” he said.

Currently a total of 43 farms have been licensed to operate cages in Lake Victoria.

Data from the Kenya Marine and Fisheries Research Institute(KMFRI) shows that by  2019, Lake Victoria had an estimated 4,357 cages spread across  31 sites of the freshwater body.

KMFRI assistant  Director of research Dr Christopher Aura says that Lake Victoria has a capacity of carrying a total of 25,427  cages

“Those who went into cage fishing are still in business and they are recording good numbers, “said Aura.

KMFRI estimates that a farmer can make an average of Ksh 100,000 per month from one cage. In 2017, cage fishing generated a total of  $8 million.

“With the effects of climate change and technology advancements, cage fishing is proving to be the only solution to retaining the Lake as a fishing territory,” observed Aura.

The long ,expensive and tedious licensing process is however locking out thousands of fishermen from the lucrative  farming venture

Siaya county agriculture executive Elizabeth Odhiambo says that a farmer would require a minimum of ksh 300,000 to put up a single small cage in the lake something  she says has locked out many small-holder fishermen

“Lack of a guiding policy has allowed rogue individuals to illegally install cages within the lake in violation of all the existing fishing regulations. This poses a danger  to the lake ecosystem”

“The requirement is that a cage should go  at least 10 metres or deeper into the water, but some install them as shallow as 6 metres”

Use of fast sinking  feeds by farmers is also a concern to fishing authorities in the Lake. Cage farmers are required to use floating pellets in feeding

Fast sinking feeds are likely to spur the growth of other aquatic plants which might limit the amount of oxygen circulation for marine life.

Going forward, KMFRI is mapping out   breeding  grounds as well as suitable locations for cage installation to curb the haphazard installation of cages