by Lynn Kibebe
in Food, News
0 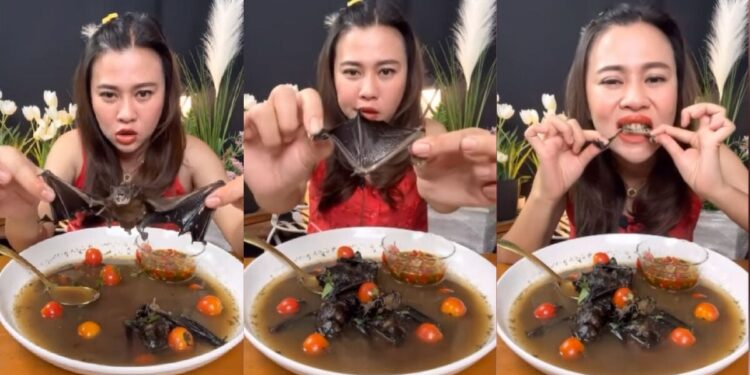 A Thai food blogger has been jailed five years after a video she recorded eating a whole bat went viral.

The woman identified as Phonchanok Srisunaklua posted the said video clip on her Facebook page, ‘Kin Saeb Nua Nua’ (Eating it Delicious and Hot), which has over 390,000 followers.

Moreover, the Thai woman in the video while referring to herself as Khru (teacher) Jui, is seen picking a bat from a bowl where the other dead animals are floating in tomato soup. She then tears it apart and devours it, describing the bats as ‘delicious’ and comparing them to ‘eating raw meat’.

She further describes how the bats nails smelled like a rat and its skin was sticky. Likewise, the food blogger points a whole bat to the camera and tells viewers that it has teeth before crunching on the bones.

Nonetheless, this video received a lot of backlashes from internet users who raised concerns about the health implications of Srisunaklua’s actions.

The Thai woman wrote she was still alive under her post on Monday, adding that the video was shot two days earlier.

Local media reports that at first, the food blogger denied the charges made against her but later posted an apology video to “society, doctors, journalists, colleagues, family and friends,” saying that she was “not thinking.”

She will now face up to five years in prison and/or a fine of up to 500,000 baht (approx. Ksh.1.7 million) for possession of protected wildlife carcasses and for crimes violating the Computer Crimes Act (2007).