Drama as wailing man now claims he is Kibaki’s grandson 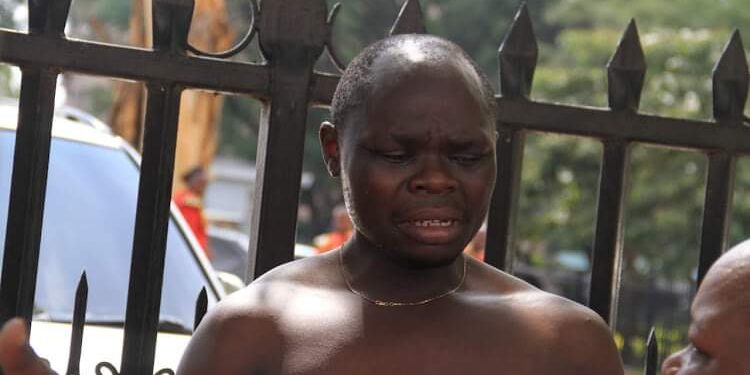 A wailing man has caused drama at Parliament Buildings in Nairobi where the body of retired president Mwai Kibaki is lying in state.

The unidentified man claimed that he is a distant grandson of the late Mwai Kibaki, and was devastated by the news of his death.

“Why have you gone too soon,” he said, amid tears.

Even with the police officers trying to console him to calm down, the man would hear none of it.

“Allow me to see him one last time,” he told the officers.

The man went ahead to remove some of his clothing, protesting that he be allowed to view the body of his ‘grandfather’, who introduced the free primary education in Kenya.

“He is my president, he gave me free education, give me time and opportunity to view his body,” he said.

Police officers later escorted the man away from the Parliament Buildings after efforts to calm him down were unfruitful.

The body of the retired president Mwai Kibaki arrived at Parliament Buildings in Nairobi from Lee Funeral Home on Tuesday morning for the second day of public viewing.

Kenyans who did not view Mwai Kibaki’s body on Monday will now get a chance to pay their last respects.

The retired President Kibaki’s body will lie in state from Monday to Wednesday between 9 am and 5 pm.

Kibaki will be buried on Saturday, April 30, at his Othaya home in Nyeri County.

The third President will be accorded full military honors and protocols, which include conveyance of the body in a Gun Carriage, accompanied by Military Musical Honors and a 19 gun-salute.