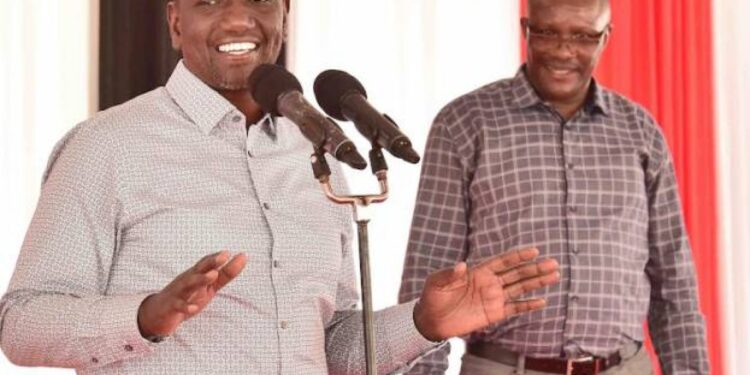 The Office of The Statehouse Spokesperson has released details of President William Ruto’s two-day Nyanza visit.

In an official statement released on Thursday, January 12, Statehouse said the tour will cover Kisumu, Homa Bay and Siaya counties.

“The President will launch several projects that directly impact on the lives of the people and are in line with the government’s bottom-up economic agenda that places premium or economic transformation, especially for those at the bottom of the economic pyramid,” the statement read in part.

The visit that will begin tomorrow, Friday, January 13 will be the second after Ruto toured Nyanza region in October 2021.

Ruto will launch the first phase of the 5,000 affordable housing programme for Homa Bay County.

“The project is expected to not only alleviate the housing deficit in the country but also significantly boost the local economy. The project will ultimately cover several towns – Oyugis, Kendu Bay and Mbita,” the statement added.

Through the projects, Ruto also seeks to create jobs for thousands of youths and stimulate the economy.

In line with his bottom-up economic model, Ruto has also promised to empower residents of Nyanza region by ensuring that the raw materials needed in the construction of the housing units are purchased from locals.

“This will boost the local economy and put money in the pockets of hustlers in Homa Bay. Jua Kali enterprises will expand and create jobs and wealth for the three million people in the sub-sector,” the statement read in part.

Homa Bay was the first devolved county government to sign the Affordable Housing Memorandum of Understanding (MoU) in April 2018.

The county has set aside 11.6 acres for the affordable housing project which is critical to achieving the President’s Housing agenda to house Kenyans in dignity.

Already, 39 counties have identified land on which affordable houses will be built, the statement read in part.

Ruto also plans to reduce the housing gap which currently stands at 2 million units. “The target is to increase the supply from 50,000 to 200,000 a year,” Statehouse said.

Do Not Be Distracted By Sideshows, Ruto Tells Supporters as He Gets IEBC Clearance