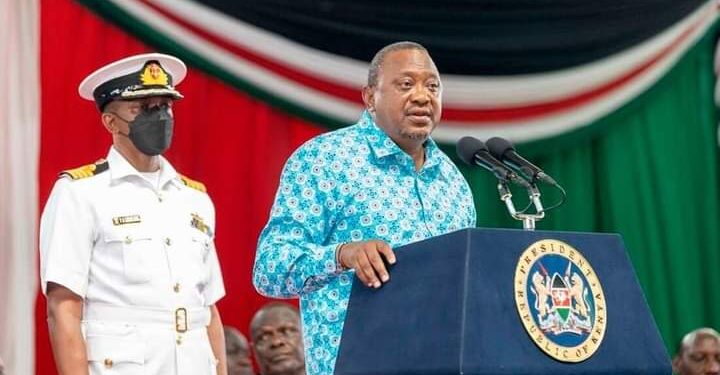 President Uhuru Kenyatta will on Monday receive the body of the former head of state Mwai Kibaki in Parliament where it will lie in State for three days.

In a statement sent to newsrooms, Interior Cabinet Secretary Fred Matiangi, who is also the chairperson of the National State Funeral Committee said President Kenyatta, accompanied by first Lady Margaret Kenyatta will lead the nation in paying their last respects and tributes.

“His Excellency Hon. Uhuru Kenyatta, C.G.H., President and Commander-In-Chief of the Kenya Defense Forces, accompanied by the First Lady H.E Margaret Kenyatta, E.G.H., will lead the Nation in paying tributes to the late President, as well as the paying of their last respects. II. The Head of State and Government shall arrive at Parliament Buildings at 10:00 a.m. on Monday, 25th April 2022 to receive the body of the Retired President and commence the three days of lying-in-state,” Matiangi stated.

“All State Officials whose attendance is required by protocol have been notified; and they are therefore requested to be in the precincts of Parliament by 09:00 a.m.”

The CS added that the cortege will leave the funeral home at 07:05 a.m. with Kibaki’s casket draped in the National Flag and escorted to Parliament by his family.

The CS stated that the Solemn Procession shall pass through Valley Road, and Kenyatta Avenue through-to- Parliament Way.

Matiangi pointed out that a Military 3 Guard of Honor will be mounted along Parliament Road for the entry procession into Parliament.

The CS further announced that the public viewing at Parliament Buildings will be between 09:00 a.m. to 5:00 p.m. on Tuesday and Wednesday.

After lying-in-state for three days, the military gun carriage and State Funeral Procession will make its way from State House to the Nyayo Stadium on Friday, the venue of the National State Funeral.

During the State Funeral, Kibaki will be accorded full military honors and protocols, which include, conveyance of the body under escort in a Gun Carriage, accompanied by Military Musical Honors and a 19 gun-salute.

“The Government encourages all Kenyans to participate in the State Ceremonies and to also take time to honor the memory and legacy of the Third President by reflecting on ways in which each one of us can foster the wellness of our nation by creating a more peaceful, loving, and united Kenya,” said Matiangi.

The government has already declared Friday a public holiday to enable all Kenyans to participate in the State Funeral service either physically or by following the proceedings on Television, radio, social media streaming among other outlets.

Kibaki’s body will later be laid to rest on Saturday at his Othaya home in Nyeri County.

Kibaki, who died aged 90, served as the country’s third president from December 2002 to April 2013, taking over from the authoritarian rule of Daniel Arap Moi.

His death was announced on Friday by President Kenyatta who took over from him in 2013.