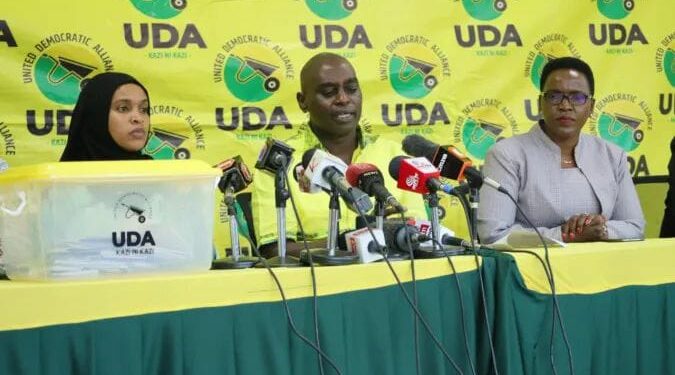 891
SHARES
3.5k
VIEWS
Share on FacebookShare on TwitterShare on WhatsApp

The United Democratic Alliance party is set to conduct repeat and fresh nominations exercises on Wednesday and Thursday this week.

National Elections Board chair Anthony Mwaura in a press statement on Sunday evening said the scheduled primaries will be done in strict compliance with the party rules.

Mogotio constituency in Baringo county will conduct repeat polls following protests from a section of aspirants that the exercise was not transparent.

Aspirant Reuben Kiborek protested the award of the ticket to the incumbent MP Daniel Kamuren who was declared the winner of the exercise held on Thursday.

The exercise will be repeated on Thursday, April 21.

Kamukunji and Roysambu constituencies in Nairobi will hold a repeat nominations exercise on Wednesday, April 20.

The party will have nominations in Embakasi East on Wednesday. Kilome and Makueni constituencies will hold theirs on Thursday.

In Mathare and Dagoretti North constituencies, the UDA party will conduct joint nominations with the ANC party on Wednesday to identify strong candidates who will fly the Kenya Kwanza Alliance ticket.

The UDA party has also scheduled repeat primaries for Members of County Assemblies in several Nairobi wards on Wednesday.

The wards include Landi Mawe, Nairobi City Central, Ngara, Pangani and Ziwani/Kariokor in the Starehe constituency.

In the Embakasi North constituency, repeat polls will be conducted in Dandora wards.

In Embakasi West Constituency, the UDA party will conduct repeat polls in Mowlem ward only.

In the Kamukunji constituency, the polls will be repeated in Airbase, California, Eastleigh North, Eastleigh South and Pumwani wards.

Banned Kenya and Zimbabwe to be included in 2023 AFCON draw

Pakistan Orders Inquiry into Killing of Journalist in Kenya