Talks Underway to Have Kalonzo Back In Azimio~ 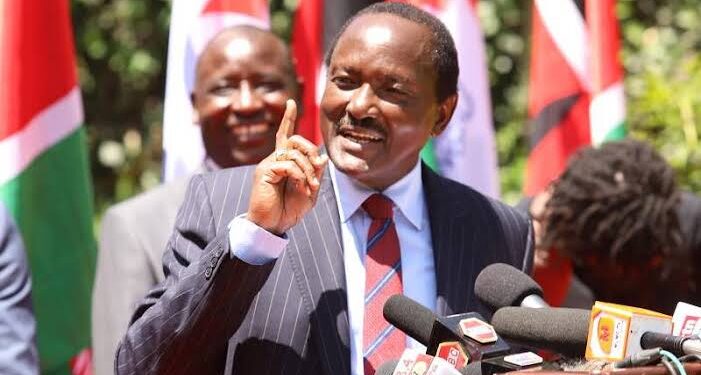 Two days after walking out from the Azimio la Umoja One Kenya coalition due to missing out the running mate position and launching his presidential bid, Kalonzo Musyoka may be making a comeback into the coalition.

Moreover  since exiting Azimio, the wiper boss has held several meetings with some figures from the coalition party’s leadership.

Reportedly Kalonzo has demanded that the Chief Cabinet Secretary position be included in the Azimio coalition agreement to assure him that the position is preserved for him. He argued that, this position which is equivalent to the Prime Minister position is currently not within the current executive structure.

The wiper boss has shifted severally in protest, the most recent move ending in him declaring that he will run for president, only for other reports to emerge of talks to reverse this.

KANU Chairman Gideon Moi is allegedly at the centre of the diplomacy discussion between Kalonzo and the Azimio leadership.

In addition, Kalonzo has in recent months engaged in a series of political manouvres , hence creating both friction and confusion in his circles.

It began splitting the National Super Alliance (NASA) due to claims of being shortchanged financially and politically by his partners, the Raila Odinga-led Orange Democratic Movement (ODM) party.

He then spearheaded the formation of the One Kenya Alliance (OKA) in March 2021; after terming the NASA union as abusive marriage, promising never to work with Odinga and ODM.

However Kalonzo joined hands with his estranged partner, ODM party and its leader Raila Odinga in Azimio la Umoja in March 2022, after a protracted hesitation. President Uhuru Kenyatta is alleged to have played a pivotal role in roping Kalonzo into the Azimio ranks.

Moreover, after the coalition declaring Raila as their presidential flag bearer, the wiper boss demanded for the change of the coalition name to Azimio la Umoja One Kenya alliance. After the partners gave in, the name was changed on April 1, 2022.

Furthermore, Kalonzo started battling for an all-or-nothing demand for the running mate position, saying he deserved the position as he had yet again downgraded his presidential ambition.

Kalonzo Musyoka’s demands saw the start of a drawn-out stand-off over the running mate position. Kalonzo even  run an open campaign holding rallies in Ukambani region.

Furthermore, the establishment of Azimio’s panel of eminent persons to vet Odinga’s running mate hopefuls, cane about. The idea of Interview running mate hopefuls did not sit well with the wiper boss who initially refused to participate but later on begrudgingly attended the interviews.

It is yet again decision time for Mr. Musyoka, a man whose unpredictable moves are spinning the heads of political observers

“Expedite Reforms To Pave Way For Compensation Of Kenyan Victims Of The 1998 Embassy Bombing,” – Raila To US Congress