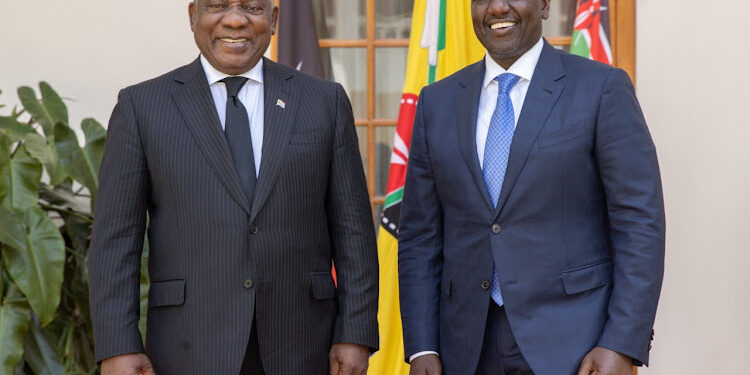 Kenyans will be able to travel visa-free to South Africa as from January 2023 as per the new resolutions announced by Presidents William Ruto and Cyril Ramaphosa on Wednesday, November 9.

The two leaders in a joint address at state house, Nairobi after holding bilateral talks announced that they had loosened the existing stringent immigration policies between Kenya and South Africa to boost continental trade.

Moreover, as per the new regulations, Kenyans will enter the second-largest economy in Africa visa-free for up to 90 days each year.

“Kenyans holding ordinary passports will be allowed to enter South Africa on a visa-free regime for up to 90 days per calendar year,” President Ruto announced.

Likewise, the President of South African announced that the plan takes effect in January 2023, adding that the two countries are working towards implementing the arrangements.

“With the view of allowing Kenyans to visit South Africa on a free-visa basis, we have discussed the thorny issue of visas. We agreed that indeed Kenyans should be able to visit South Africa without requiring them to have visas. This will commence on the 1st of January 2023. Our officials will speed up the processes to implement this move,” President Ramaphosa stated.

Similarly, the two Presidents stated that they have agreed on a returns policy in instances of breach of immigration laws and regulations of both countries.

“The two countries have also agreed on a return policy when immigration laws and regulations are breached to make sure that bad elements that try to infiltrate our borders are dealt with firms and decisively,” noted President Ruto.

The head of state further added that they have agreed to develop a sustainable mechanism to identify, monitor and resolve non-tariff barriers that limit the trade potential between Kenya and South Africa.