Disgruntled split in President Uhuru’s backyard as Muturi gets crowned 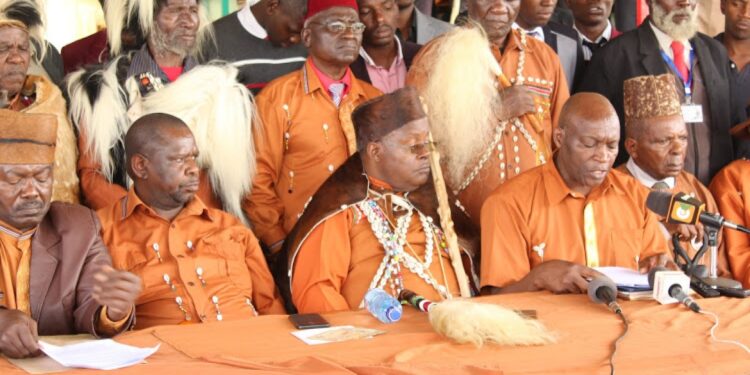 On Saturday, National Assembly Speaker Justin Muturi is to be crowned Mt Kenya spokesman in a divisive ceremony that could trigger physical confrontation.

The new power tussle comes at a time when Uhuru’s grip on the region seems to be waning amid questions whether he would have any wherewithal by 2022 to influence his succession.

Muturi should be crowned by elders at Agikuyu Shrine of Mukurwe wa Nyagathanga in Murang’a county.

But there is a problem. Muranga county officials, MCAs and a section of elders allied to former Gatanga MP Peter Kenneth have threatened to scuttle the process.

County officials are blunt. They want to block access to the venue, citing a lack of consultations.

Governor Mwangi Wa Iria — himself a presidential aspirant — is seen to be among top Kikuyu politicians out to scuttle the event.

In a rare show of solidarity, however, top leaders from Mt Kenya East have rubbished opposition to Muturi, insisting he must assume the leadership mantle.

In an interview with the Star, Kiraitu said the elders approached Muturi since he was the most qualified leader from the region to take up that job.

“He has a huge experience which no other leader in the region has. That is why I am supporting him, and he should be officially declared as a leader of the region,” Kiraitu said.

He said Mt Kenya East has been performing poorly in politics with none of its sons and daughters sitting “at the national high table where the national cake is being discussed”.

However, others say Mt Kenya East, where Muturi comes from, has recently been rewarded by naming Martha Koome as the country’s new Chief Justice.

Kobia said those fighting Muturi are unfair because the speaker has voluntarily stepped out to lead the region and deserves support.

“Because no one else asked to be the region’s spokesman it is only just that Muturi is supported. He is the third senior most leader in the country by virtue of his position. He is a team player in addition to having many years of political experience,” she said.

However, several political leaders from Central Kenya dismissed the ceremony, signalling a looming political split in the region.

“It will not give him an upper hand because the people of Mt Kenya never had cultural kingpins and spokespersons until the colonialists came and installed the generally unpopular ‘Paramount Chiefs’,” she told the Star.

She said the speaker and other leaders seeking votes from the region and elsewhere will have to go to the ground and seek the support of the people who are the only legitimate determinants of leadership.

“In the meantime, it must be remembered that as a political community, our leader, the President, has not vacated his seat and culturally, we don’t inherit one when they are still alive,” she added.

Former Mwea MP Peter Gitau said the coronation would have no consequences for the dynamics of succession politics in the region.

Gitau said the Speaker had jumped the gun and should have consulted the current leadership of the county before having the ceremony.

“Who has he consulted among leaders? He just took a few elders and gave them a few coins to coronate him. Why can’t he deal with the leadership of region who represent the people?” he asked.

Gitau said failure by leaders in the region to consult each other and work together are to blame for the disunity in the region.

“These (elders) are people who want to feed their stomachs, but it is not about issues concerning the leadership of the region. He should have met all communities before having the ceremony,” he said.

Leadership requires a lot of patience and consensus among all concerned communities, Gitau said.

Stephen Chege, chairman of the sports and culture committee at the Murang’a county assembly said the county has not been involved in the coronation plans as custodians of the shrine.

He said even President Kenyatta was coronated at Ihura Stadium when he was bidding for the presidency.

“The event should not be done at the shrine. It has serious ramifications beyond the fact the county has not been consulted on the activity,” he said on Thursday.

Kenya Invited to Apply for Support to Rollout Malaria Vaccine