by Anthony Wrightstone
in Golf, Sports
0 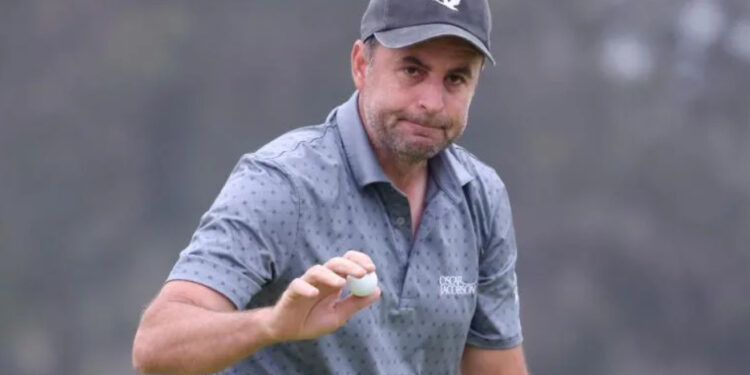 England’s Richard Bland, who won the first European Tour title in his 25-year career last month, leaped into the early clubhouse lead in Friday’s second round of the US Open.

The 48-year-old Southampton resident fired a four-under-par 67 at Torrey Pines to finish on five-under 137 for 36 holes, one ahead of American Russell Henley, who had yet to tee off after shooting 67 on Thursday.

Now he’s a threat to become the oldest winner in US Open history, breaking the mark of 45 set by American Hale Irwin in 1990 at Medinah.

It’s an inspirational age-defying tale to rival that of Phil Mickelson, who won the PGA Championship last month at Torrey Pines at age 50 to become the oldest-ever major winner.

Six-time major winner Mickelson, a six-time US Open runner-up trying to complete a career Grand Slam this week, opened on 75.

Bland lost his tour spot in 2019 but regained his status thanks to Challenge Tour rankings.

Bland is making only his fourth career major start after missed cuts at the 1998 British Open and 2009 US Open and a share of 22nd at the 2017 British Open.

It’s only the second American tournament for Bland after missing the cut 12 years ago at Bethpage.

Bland began on the back nine Friday and rolled in a birdie putt from just over 28 feet at the 10th hole, then sank another from just inside 10 feet at the par-5 13th.

Bland found a bunker at the par-3 eighth and missed a 26-foot par putt for a bogey that trimmed his lead, then closed with a par at the ninth.

Oosthuizen, the 2010 British Open champion, made bogeys at the sixth and par-3 11th holes in his second round but sank a 30-foot birdie putt at the 14th.

Singer Crystal Asige Celebrates After Being Nominated As Senator

Lawyer Ahmednasir: I Will Not Represent Ruto At Supreme Court