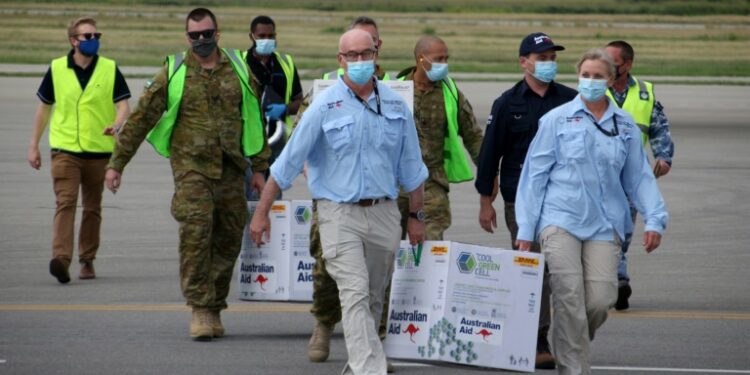 AFP - Misinformation may be spreading faster than the virus in Papua New Guinea, with large proportions of the public and even medical experts reluctant to get vaccinated

Misinformation threatens to scuttle Papua New Guinea’s already faltering efforts to bring a severe Covid-19 outbreak under control, with a survey showing one-in-four health workers are reluctant to get vaccinated.

After a year without widespread community transmission, the impoverished Melanesian nation is now seeing record numbers of new infections almost every day.

Hospitals have turned away patients due to a shortage of medical staff, who are falling ill or being forced to isolate.

With experts warning the health system is close to collapse, neighboring Australia this week sent an emergency batch of 8,000 vaccines to inoculate frontline staff.

But misinformation may be spreading faster than the virus, with large proportions of the public and even medical experts reluctant to get vaccinated.

AFP Fact Check has debunked several widely shared posts on Facebook — which along with WhatsApp is the country’s dominant digital media platform — that falsely claimed Papua New Guineans are being forcibly vaccinated as part of a mass vaccine trial, or in one case, as part of a racial genocide.

Gary Nou, a Port Moresby emergency department physician, asked more than 130 colleagues whether they would get inoculated — 24 percent said they would refuse, and 37 percent were unsure, he told AFP.

“Health workers themselves are upset, and they don’t know if the vaccine is going to help them or not,” he said.

“People were telling them it was ‘all experimental and it’s genetic therapy, and people are gonna die’, they were copying all the videos that were popping up on social media.”

“These are educated health workers,” he added.

The survey found that nearly 10 percent of Papua New Guineans would refuse a vaccine, with the figure above a quarter of the population in some provinces.

“Once you get 20 percent down in some of the high-intensity areas, like the emergency department and the labour ward, for instance, they just can’t function,” he said.

Even in normal times Papua New Guinea faces an acute shortage of medical staff, with fewer than 30,000 personnel serving a population of nine million.

St John Ambulance country chief Matt Cannon said he had seen a “concerning amount” of misinformation on social media claiming Covid does not exist at all.

“We are seeing evidence of people either being highly likely to have Covid or being confirmed cases and continuing business as usual,” he said.

In one post shared hundreds of times and fact checked by AFP, doctor Sam Maima advised fellow Papua New Guineans not to get tested, proposing a range of unproven treatments instead, including drinking two cups of warm lime tea every six hours.

Opposition leader Belden Norman Namah has called for the government to halt its vaccine rollout and suggested coronavirus may have existed in Papua New Guinea for hundreds of years.

Papua New Guinea has long struggled with immunization efforts. It is one of a handful of countries in the world where polio is still endemic.

The country’s polio outbreak is believed to have come from a weakened version of the virus — present in vaccines — entering the food chain and infecting the severely under-immunized community.

Australia has asked AstraZeneca to divert one million Covid-19 vaccine doses bought by Canberra to Papua New Guinea so widespread vaccination can begin before the government’s current mid-May target.

But even if logistical hurdles — from securing those doses in a competitive global market to building out cold storage facilities and distribution networks across a mountainous, juggle-covered nation — there are fears misinformation could scuttle the plan.

Mola said the government needed to do more to combat the spread of misinformation, and health authorities needed to communicate effectively with people still undecided about the vaccine.

“It’s one thing to donate vaccines, but if no-one is going to use them, it’s really no use,” he said.

Communications minister Timothy Masiu told AFP that while the government is concerned about misinformation, it currently has no strategy to combat it.

“We are not doing anything right now because we believe in freedom of speech. But if it comes to a worst-case scenario, as a government, we can move to make submissions to ban Facebook.”

“We also have the cybercrime act, which we can impose on people who are posting misinformation on social media,” he added.

Fact checking is rare in Papua New Guinea, with only a handful of news organizations’ verifying claims made in the public domain or on social media.

H&M Erased From Apple Maps, and Other Platforms in China Amid Boycott