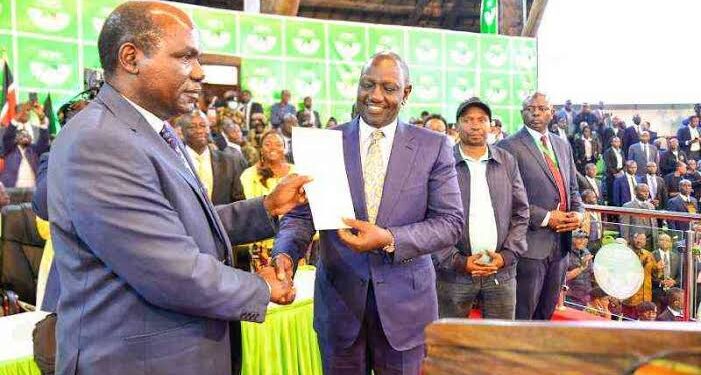 IEBC chairman Wafula Chebukati made the announcement at the Bomas of Kenya on Monday, August 15, 2022.

Chebukati further explained that Ruto’s votes represent 50.49 per cent of the total votes cast. Hence achieving the minimum number of 39 counties at 25%.

“In accordance with the Constitution and the law, chairperson of IEBC hereby declares that Ruto William Samoei has been duly elected as the President of the Republic of Kenya under the provision of Article 138 of the Constitution of the Presidential election held on August 9, 2022,” Chebukati stated.

Nonetheless, Chebukati issued the certificate of presidential results to DP Ruto as his supporters cheered wildly.

Likewise, William Ruto was flanked by deputy president-elect Rigathi Gachagua and his wife Rachel Ruto, who is the First Lady designate.

Furthermore, Wafula Chebukati, who addressed the nation at 6pm, three hours after an earlier slated time, said he had been intimidated and harassed.

He also reported that two of his commissioners; Boya Molu and Abdi Guliye were injured in the fracas. He further added that Hussein Marjan had also sustained injuries from the skirmishes at the National Tallying Center.

However, drama ensued at the Bomas of Kenya just before the IEBC Chairman Wafula Chebukati made the long-waited announcement.

Besides, Azimio la Umoja Presidential candidate Raila Odinga’s chief agent, Saitabao Ole Kanchuri, claimed that the systems used by the electoral body to tally the results of the presidential contest were compromised ahead of the official announcement.

KDF Boss to Graduate From Kenyatta University With PHD