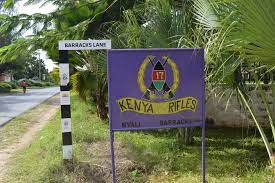 The suspect was trying to gain access to the military installation.Photo/Courtesy

Military Police have arrested a terror suspect after attempting to sneak into Nyali military barracks in Mombasa County.

Ali Hassan Mzee was attempting to gain access into the highly guarded military facility while posing as a recruit.

Ali caught the attention of military guards on duty after they noticed a suspicious person at the beach.

When questioned, Ali claimed to be a new solider posted at the barracks.

“Upon further probing, he claimed to be an Air Force officer” a police report says

Police challenged the suspect to produce his military identification documents but he failed.

According to the police report,the suspect instead  identified himself using a civilian identity card

Officers took him into  custody before military police took up the matter.

Police recovered two notebooks, four letters, two flash disks, one memory card, an electronic organizer, a pair of eye goggles, an electrical tester and an unknown substance suspected to be bhang  from the suspect.

Following the incident, security has been beefed up at the facility.

Ruto Tells Kenyans To Show Up And Vote

No Cause For Alarm Following Indomie Ban In Rwanda and Egypt: KEBS