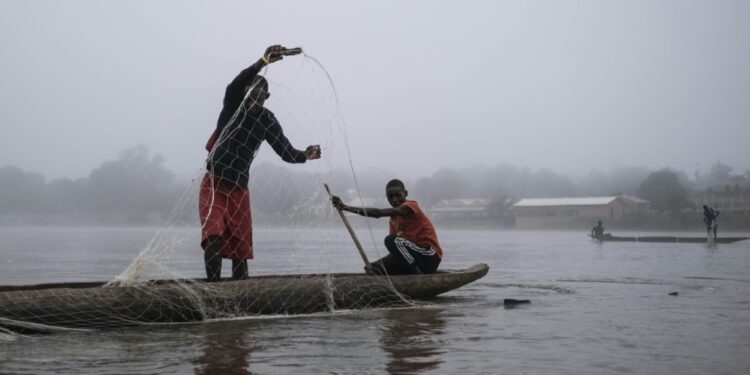 Severe flooding in the Central African Republic has been castastrophic this year, with fisheremen among the worst affected | AFP

Dawn is just breaking over the Central African Republic’s capital Bangui as Pacome Koyeke glides his dug-out canoe over the silent misty waters of the Ubangui river.

The tributary of the mighty Congo often floods during the rainy season, but this year the water levels have been catastrophic for the nation at the heart of the African continent.

And communities that eke a livelihood from fishing have been among the worst affected.

Endless civil wars have raged since 2013 and the United Nations lists Central Africa Republic (CAR) as the second least developed country in the world. Natural disasters only make things worse.

Koyeke, 29, has been casting his net and pulling it in since 3 am, hoping for a good catch.

But after several hours all he must show for his efforts are two small red fish.

“At the moment all the fishermen are struggling”, he says, his gaze fixed on the horizon.

With the flooding “the very high pressure of the water makes the fish flee their usual places,” says the 29-year-old.

“They go and hide under the roots of trees, where the pressure is lower, but we can’t go there.”

In the distance, a group of fishermen is caught silhouetted on the edge of the thick mist as they roll out a 300-metre-long net before casting it into the river, in vain.

There is a shortage of fish and equipment to make the nets which usually come from Europe, Cameroon, or Nigeria, but supplies have dried up.

“Fishing’s like a lottery today, you may win one day and the next day you lose,” spits Edouard Franck, who guards canoes after having to give up fishing when he could not afford a new net.

The local catch includes eels, carp, and captain fish, but fewer and fewer are on sale at the market at Ouango, a fishing community nearby the river.

For want of enough fish to sell, the women behind the stalls sing and dance to try to pull in passers-by and sell their meagre display.

“It’s difficult for us at the moment,” admits Eveline Binguimale.

Much of the population has traditionally relied on the availability of copious quantities of fish at cheap prices.

But those days appear to have passed.

“We can’t eat fish the way we want to anymore,” says Sandra Liki wandering round the market looking to buy fish to feed her family.

The World Bank estimates 71 percent of the nation’s six million people live below the international poverty line of $2.15 a day.

The floods have hit at a time when half the population is suffering from food insecurity and relies on international aid, the UN says.

Since June, about 85,000 people have been affected by the floods across twelve of CAR’s 17 prefectures, according to the UN.

In 2019, the last time such severe floods struck, the United Nations said 100,000 people lost their homes.