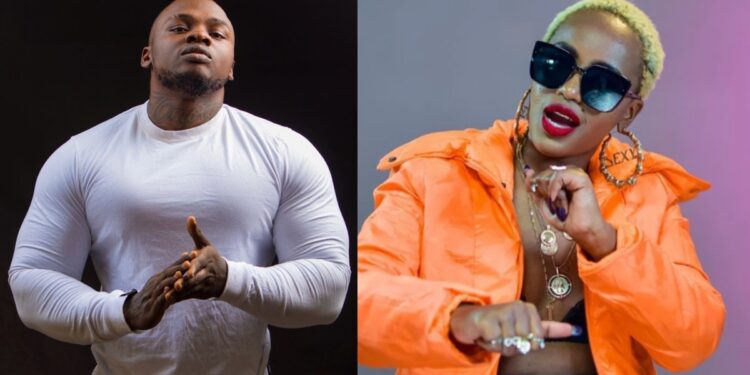 World-acclaimed rapper Brian Omollo, alias Khaligraph Jones has spared some time to congratulate Kenya’s best rapper Femi One for achieving yet another impressive milestone in her music career.

The Mazishi hitmaker, just like thousands of other Kenyans was impressed and so proud of Femi One after she was crowned the best female rapper in the just concluded AFRIMMA awards.

The Kenya Times understands the AFRIMMA awards gala was held in Dallas, Texas on November 19, 2022.

Following the win, Femi One took to social media to thank God, his team, and fans for making it possible for her to beat all the female rappers in Africa to emerge as the winner.

The announcement touched Khaligraph Jones’ heart and he duly came out to congratulate the femcee as he urged her to keep chasing her dream and make Kenya proud.

Taking to his Instagram account, the rapper noted Femi One’s win was a big one for the hip-hop community in East Africa.

Khaligraph Jones pampered Femi One with affection and urged her to work even harder and use the milestone to grow even bigger.

Of course, the rapper could not wrap up his congratulatory post without throwing some jabs at Kenyan dailies as he suggested they feature Femi One on the covers of their magazines since she deserves it.

”Femi Uno, Congratulations on your Win, Always believed in you from day 1… This is one of the biggest wins in East african Hip Hop, don’t sleep on this Milestone, Waiting to see if @nation and @standardkenya are gonna publish this news somewhere on the Front page of their newspapers cause they really Have to.. @femi_one 💯💯💯💯 #respecttheogs,” Khaligraph wrote.

Other celebrities and music lovers were not left behind either, as they too took to different social media platforms to congratulate Femi One.

From The Kenya Times to you, Congratulations Femi One aka Femi Uno aka Numero Uno.

Author who fled ‘torture’ in Uganda arrives in Germany