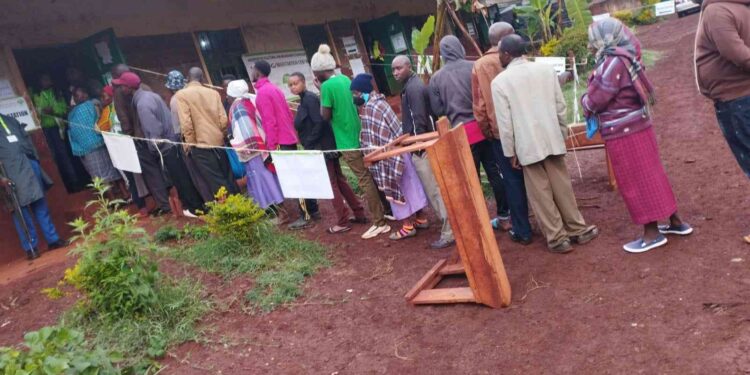 A low voter turnout has been witnessed in  Garissa and Kandara constituencies as members of the public line up to elect their new members of parliament.

In the by-elections held on Thursday, January 5, members of the two constituencies turned out to elect MPs who will replace Aden Duale (Garissa Town) and Alice Wahome (Kandara) who were appointed to President William Ruto’s Cabinet.

On whether the turnout was high or low, CS Duale said that is a matter that should be put to the Independent Electoral and Boundaries Commission (IEBC).

“I did not do voter analysis this morning. I came to vote. The people of Garissa ultimately will come out and vote for the person of their choice and I am asking them to keep the peace,” CS Duale said.  \

Oura, the Government Guest House Returning Officer further stated that only 90 voters had cast their votes by afternoon making 20% of the registered voters.

“We expect the rest of the voters to show up in the afternoon because most of them had gone to fetch water and feed their livestock,” Oura said.

“I am hoping that they still come out in the course of the day we still have some time. I am appealing to them to come out and exercise their rights as citizens of this country,” Dekow said.

Garissa Town has a total of 53,253 registered voters.

CS Wahome said the turnout was very low revealing that it only took her less than two minutes to cast her vote. She urged her constituents to show up and exercise their democratic right.

“I call upon the voters to come out early and vote because there is no queue and it is important that they come out and vote for their preferred candidate,” CS Wahome said.

Sakaja Breaks Silence on His "Welcome Back" Billboards

Over 30 Groups In Kajiado East are Thriving, Thanks To Uwezo Fund