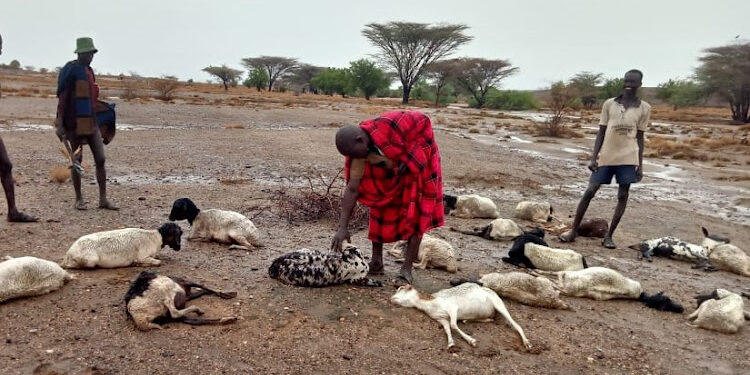 President William Ruto said they have raised about Ksh 25 billion for mitigating the effects of drought and famine currently experienced in parts of the country.

While speaking in Nakaalei, Turkana County where he flagged off the distribution of relief food and launch of livestock take-off programme, president Ruto assured Kenyans of his government’s commitment to ensure no one dies of hunger.

The head of state further disclosed that the country’s development partners have given out Sh20 billion while his government has committed Sh4.5 billion in a move to provide food and water to 4.5 million Kenyans, livestock, and wildlife.

“The resources that have been put together by our development partners so far has raised Sh20 billion and government of Kenya has committed Sh4.5 billion,” he said.

“Next week with our development partners again, Kenyans of goodwill and corporates, we are coming together hopefully to raise another Sh10 billion to get food for Kenyans, livestock and our wildlife.” The president added.

Likewise, president Ruto noted that the government has released Sh200 million to provide water and food to the wildlife in national parks and game reserves.

“We have lost significant heads of livestock. Almost 2.5 million livestock have died in this drought and a significant number of our wildlife. We have committed Sh200 million to supply water and food to our wildlife in game parks and national reserves,” he said.

He further stated that the government will continue to provide relief food to the affected Kenyans until the time when the country will have bumper harvest.

Similarly, president Ruto said the relief food will be going to schools, to ensure that no child drops out because of food, as well as hospitals.

Moreover, the head of state highlighted the need to support farmers with seeds and fertilizer to allow the country to achieve the food security agenda. The president said his government will use Sh12 billion to ensure farmers across the country get the much-needed support for their production for this to be achieved.

“I would like to inform farmers in Turkana and across the country that the government will provide you with seeds and fertilizer at a low cost and that is the only way to deal with hunger. Our farmers can produce for domestic consumption as well as for export,” he said.

IEBC To Brief Hopefuls Ahead Of Clearance Exercise