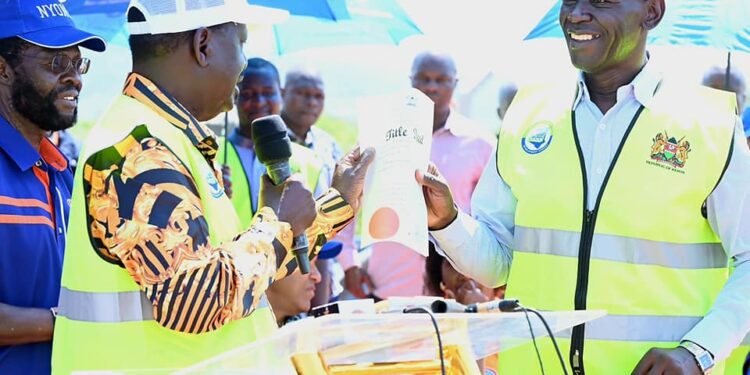 Raila Odinga hands over a title deed for a land he donated for a water project.Photo/Courtesy

Azimio leader Raila Odinga has donated a one-acre piece of land for the construction of water project in Kisumu.

On Thursday Raila witnessed the commissioning of the project.

The project seeks to serve 50,000 people and address the issue of water shortage within Riat, Korando B and Kogony areas.

Kisumu governor Anyang Nyong’o the donation was for public good

“Today Rt. Hon Raila Odinga has demonstrated the act of selflessness by donating his one-acre parcel of land in the leafy Riat hills, Kisumu for the construction of the Otonglo-Riat water project for the public good, ”said Nyong’o

Raila handed over the title deed of the land to the chairman of Lake Victoria South water works Development Agency (LVSWWDA),the implementer of the project.

Despite having a freshwater body, Kisumu still experiences acute water shortages with its population steadily on the rise.