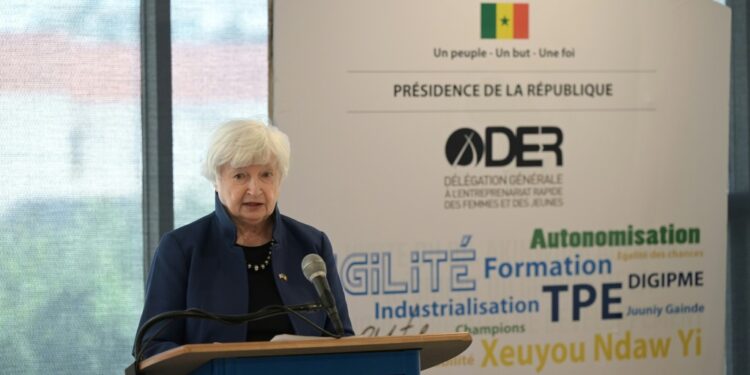 US Treasury Secretary Janet Yellen on Friday touted the fruits of a new “mutually beneficial” economic strategy towards Africa, contrasting the damage caused by Russia’s invasion of Ukraine and China’s practices.

“The United States is all in on Africa, and all in with Africa,” she said during a visit to Senegal, part of a push by President Joe Biden’s administration to boost relations with a continent where the United States faces increased competition from other major powers.

Yellen, who had attended a US-Africa summit hosted by Biden in Washington last month, said the president, vice president and other cabinet secretaries would travel to African countries this year.

“The world is finally catching up to recognizing Africa’s contributions — past and future,” she said on a visit to a business incubator in the Senegalese capital Dakar, her first stop on a three-country tour of the continent.

The relationship, she said, would be “based on mutual cooperation and greater ambition”.

Yellen cited the Covid-19 pandemic and Russia’s invasion of Ukraine as major economic headwinds for Africa.

“Let me be clear: the single best thing we can do to help the global economy is to end Russia’s illegal and unprovoked war in Ukraine,” she said.

“Russia’s war and weaponization of food has exacerbated food insecurity and caused untold suffering, and the global economic headwinds caused by the actions of a single man — President Putin — is creating an unnecessary drag on” economies.

In her speech, which followed a meeting with Senegal’s Economy Minister Oulimata Sarr, Yellen highlighted the continent’s promising demographics.

But she said economic growth would only come with adequate job opportunities and investments.

US investments on the continent, she said, are “motivated by our mutually beneficial, long-term partnership — the goal is to generate positive economic returns while fostering sustainable debt.”

“We believe that the international community, including China, needs to provide meaningful debt relief to help countries regain their footing,” she said.

Yellen’s speech came a day after she announced the Treasury had begun taking measures at home to prevent a default on US government debt.

In Dakar, Yellen described US plans to partner with African countries on climate change, health and security issues.

She reiterated US support for the African Union to join the G20.

She said international institutions needed to be reformed, but also that African governments needed greater accountability and transparency.

“Countries need to be wary of shiny deals that may be opaque and ultimately fail to actually benefit the people they were purportedly designed to help in the first place,” Yellen said.

“This can leave countries with a legacy of debt, diverted resources, and environmental destruction.”

In an implicit contrast with China, which takes a hands-off approach in countries where it invests, Yellen said the US has taken a “different” tack, prioritizing “transparency, good governance, accountability, and environmental sustainability.”

“While our approach may be exacting, we believe it delivers lasting results,” she said.

“A prosperous continent won’t just benefit Africa – it will help to strengthen the American and global economies as well,” she said.

“We are here as a partner and will help work for Africa’s success.”

Yellen is scheduled to travel to Zambia on Sunday, and later to South Africa.

At the Washington summit, which brought together 49 African leaders in December, Biden called for a long-term partnership with Africa rooted in good governance.

It was the first such gathering since Barack Obama invited African leaders in 2014.