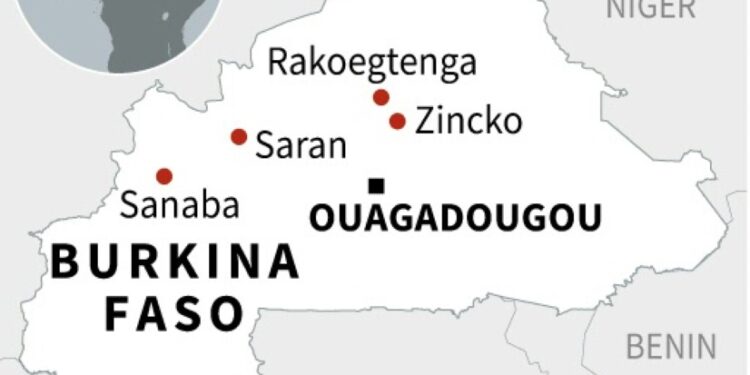 The attacks, which happened on Thursday, were the latest to hit a civilian auxiliary force supporting the military in their seven-year fight against jihadists in the volatile West African nation.

Since 2015, Burkina Faso has been grappling with an insurgency led by jihadists affiliated with Al-Qaeda and the Islamic State group that has killed tens of thousands and displaced around two million people.

The “first attack targeted an advance party of Volunteers for the Defense of the Fatherland (VDP) in Rakoegtenga,” a town in the northern province of Bam, a VDP official said on condition of anonymity.

Six auxiliaries and a woman died in the attack, he said.

Around 10 people were wounded, including some seriously, who were “evacuated to Ouagadougou for appropriate care,” the VDP official said.

He said the second attack killed around ten auxiliaries and a person in Nayala province in the northwest “in the afternoon when a convoy escorted by auxiliaries and soldiers was ambushed.”

Security sources confirmed two “jihadist attacks” but gave no precise death toll, referring only to “a number of losses”.

The VDP, set up in December 2019, comprises civilian volunteers who are given two weeks of military training and then work alongside the army, typically carrying out surveillance, information-gathering, or escort duties.

Two other incidents linked to armed jihadist groups were recorded on Thursday, according to other security sources.  In the north-central province of Sanmatenga, a joint military and VDP team was targeted in Zincko, one of them said.

Later in the evening, gunmen raided the town of Sanaba in Banwa province, killing eight civilians.

Commentators worry that the poorly trained volunteers are easy targets for jihadists — and may dangerously inflame ethnic friction without proper controls.

Last week around sixty women, girls, and babies in the northern Djibo region were abducted while gathering wild fruit and other food, investigators have said.

Late last year, authorities launched a drive to recruit 50,000 VDP — 90,000 signed up — but hundreds of volunteers have died, especially in ambushes or roadside bomb attacks.

Damiba had seized the helm in January 2022 from the last elected president, Roch Marc Christian Kabore.

On December 29, military prosecutors said they were probing a new attempt to “destabilise” the country.

They said they had arrested a chief warrant officer and a sergeant who, according to a whistleblower, had been in contact with Lieutenant-Colonel Emmanuel Zoungrana — a prominent officer who had been arrested in January 2022 and released in December.