Engage Kenyans If You Want to Reintroduce BBI – Raila to Ruto 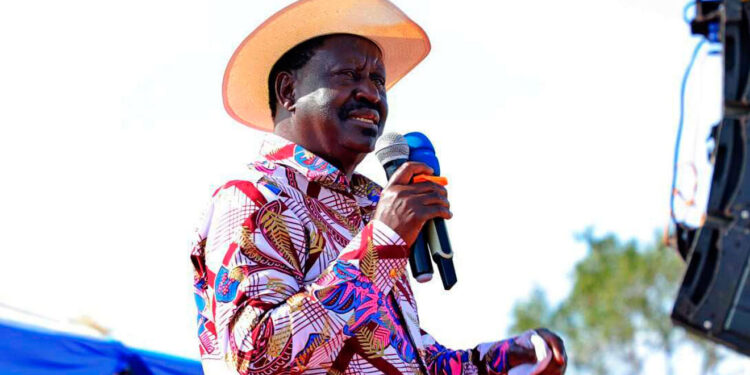 Opposition boss Raila Odinga has asked president William Ruto to engage Kenyans on any constitutional amendment he intends to initiate.

The Azimio la Umoja One Kenya Coalition leader made these remarks in reference to President Ruto’s proposal to amend Parliament’s Standing Orders to allow Cabinet secretaries to answer questions with an aim of increasing accountability.

According to Raila Odinga, the proposal is a departure from the current government structure.

“It has to be debated extensively by the people of Kenya. If he wants to have the position of Prime Minister, it is in the Building Bridges Initiative (BBI) document. Why do you call him a Prime Cabinet Secretary? Call him a Prime Minister and give proper portfolio. I am very sorry for Mr Musalia Mudavadi, a person of his stature is given no portfolio just a title. It is an embarrassment,” he said.

“I do not want to engage Ruto in any kind of argument; he knows everything he is proposing is in the BBI document. If he wants us to talk, let’s start from there. He must engage the people of Kenya in any major constitutional amendment he wants to bring,” Mr. Odinga added.

The ODM leader further asked the president to tell Kenyans the truth on what transpired at the Bomas of Kenya during the August 2022 elections.

Raila made these remarks during a church service at the Anglican Church of Kenya Mombasa Memorial Cathedral in Mombasa.

Likewise, while backing the planned audit on the presidential poll, Raila Odinga noted that Kenyans want justice and to know the truth.

He stated that the audit should begin with the Independent Electoral and Boundaries Commission (IEBC) chairman Wafula Chebukati, whom he insisted must be charged with crimes against humanity at The Hague over the conduct of the presidential poll.

“The minute he disappeared, where did he get the results that he announced? If he can answer those questions, Kenyans will be happy. We won’t stop talking about this issue,” he said.

He further added that he will be revealing to Kenyans what transpired at the Bomas of Kenya.

In addition, the Azimio leader rebutted claims by the head of state that there was an attempt to overturn the people’s will in the presidential election.

“How would a government carry out a coup against itself? If they wanted to do a coup, who would have prevented them from it? President (Uhuru) Kenyatta said that he wanted free and fair elections and that the government would not interfere in any way. What happened? It’s what all Kenyans want to know. It’s the IEBC chairman who conducted a civilian coup, four against three,” he said.

“We work together at all times; we have nothing like a power struggle within Azimio. Everything will be done very smoothly, we are going to strengthen Azimio and the constituent parties of the coalition to make it strong. We are together.” he added.

Jack Ma to Give Up Control of Ant Group