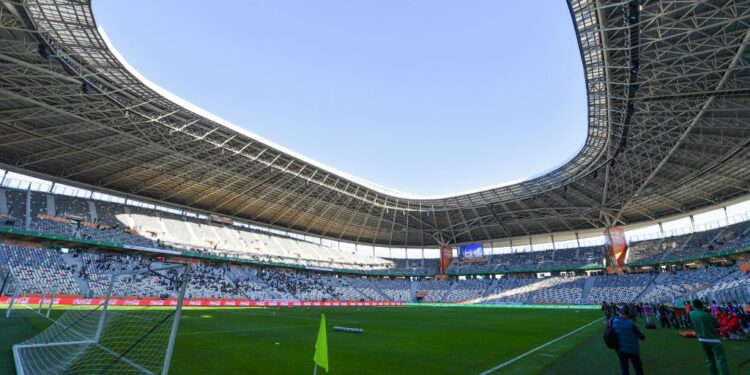 The 40,000-capacity Stade Nelson Mandela in Algiers, venue of the opening match of the 2022 African Nations Championship | AFP

Hosts and title favorites Algeria edged Libya 1-0 on Friday in the opening match of the 2022 African Nations Championship (CHAN) thanks to a second-half penalty converted by Aymen Mahious.

The lone forward in the starting line-up netted on 57 minutes in Algiers after a weak back pass led to him being fouled by goalkeeper Muad Allafi.

Algeria hopes to win a competition reserved for footballers playing in their country of birth for the first time having finished fourth in a previous appearance 12 years ago.

Ethiopia play Mozambique at the same venue on Saturday in the other opening round match in the mini league.

It will be followed by a Group B double-header in the northeastern city of Annaba with two-time champions the Democratic Republic of Congo facing Uganda before the Ivory Coast meet Senegal.

There are 17 countries hoping to succeed Morocco as winners of a tournament first staged in 2009 and won by DR Congo in the Ivory Coast.

Morocco withdrew at the last minute after Algeria refused to authorize a direct flight that would have taken the delegation from Rabat to Constantine, the Group C base.

Among the effects of diplomatic ties between the north African Neighbours being cut is a ban since 2021 on Moroccan aircraft entering Algerian airspace.

Morocco had hoped to win a third consecutive CHAN title having beaten Nigeria 4-0 in the 2018 final in Casablanca and Mali 2-0 in the following final in Yaounde.

With three groups of four and two of three, the original plan was that two teams would advance to the quarterfinals from each larger section and one from the smaller ones.

The withdrawal of Morocco, leaving Ghana, Madagascar, and Sudan in Group C, means there are now three sections with three teams and seven quarter-finalists instead of eight.

A solution would be to qualify the best second-place finishers among the three-team mini-leagues, but CAF have yet to reveal their plan.

Raila in South Africa for a Week Long Visit

DCI Detectives In The US For Advanced Training