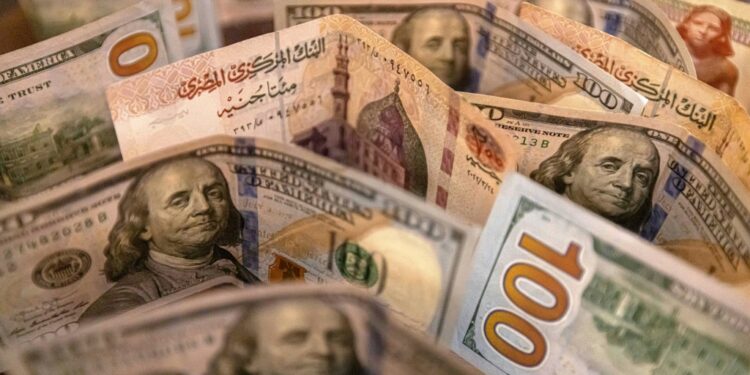 The IMF in late 2022 approved a $3 billion loan programme for Egypt, conditioned partly on 'a permanent shift to a flexible exchange rate regime' | AFP

The Egyptian pound traded Wednesday at half its value from March after the central bank intervened for a third time as part of an International Monetary Fund loan agreement.

The devaluation, representing a drop of around 50 percent against the dollar over the 10-month period, comes as the price of imported food and other goods soars in the Arab world’s most populous country.

The currency plunged to 31.95 pounds to the dollar in state banks on Wednesday, before settling at 29.7 in the afternoon, according to the central bank.

It had been trading Wednesday at around 35 pounds to the dollar on the parallel market.

Egypt’s economy was hit hard after Russia’s invasion of Ukraine last February unsettled global investors and led them to pull billions out of the North African country.

In a low-income neighborhood of central Cairo, Shaimaa al-Abed said the economic crunch has left her feeling “hopeless”.

“Even the cheapest food has doubled and tripled. What are we supposed to eat?” asked Abed, who has a four-year-old son, holding back tears.

She said she was looking for work, adding: “We were doing alright, but now we’re in the gutter.”

The IMF late last year approved a $3 billion loan programme for Egypt, conditioned on “a permanent shift to a flexible exchange rate regime” and a “monetary policy aimed at gradually reducing inflation”.

Egypt also needs to carry out “wide-ranging structural reforms to reduce the state footprint”, the IMF said at the time, with the economy dominated by powerful state and military-led enterprises.

The hashtag The Dollar was trending on Twitter in Arabic on Wednesday, with comments ranging from anger to fear.

“Before, I knew how much my products would cost for the next eight months. But now, we sell at one price in the morning, another in the afternoon, and a third at night,” he told AFP.

Egypt has only $34 billion in foreign currency reserves compared to $41 billion last February, while its foreign debt has more than tripled in the past decade to $157 billion.

Timothy Kaldas, a policy fellow at the Tahrir Institute for Middle East Policy, warned there could be more economic pain to come.

“The inflation experienced over the past year will persist for at least another year as these shocks to the currency are absorbed,” he said on Twitter.

Prime Minister Mostafa Madbouli on Monday told ministers to cut budgets and announced a moratorium “on new projects that have a clear dollar component”.

Egypt has been dependent on bailouts in recent years, both from the IMF and from Gulf allies.

According to ratings agency Moody’s, Egypt, with a population of 104 million, is one of the five economies most at risk of defaulting on its foreign debt.

Telkom Kenya Seeks Access to Mpesa Paybills for its Customers