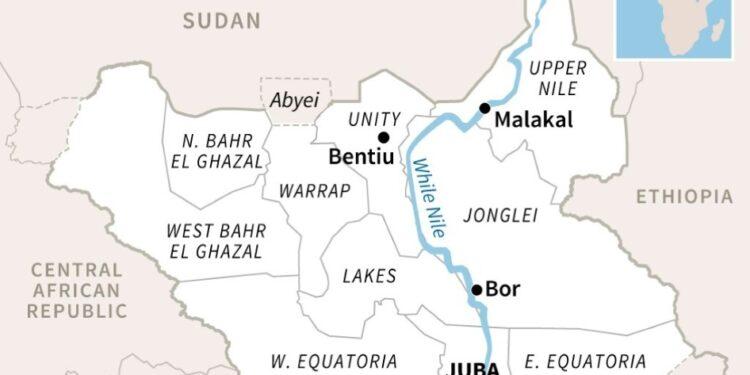 Three aid workers have been murdered this month in conflict-battered South Sudan and a disputed border area, the UN’s emergency response agency said Wednesday, calling on authorities to bring the killers to justice.

Armed men raided a village in the oil rich Abyei Administrative Area on January 2 and killed two aid workers and several civilians, the UN’s Office for the Coordination of Humanitarian Affairs (OCHA) in South Sudan said in a statement.

Abyei Administrative Area spokesman Ajak Deng told AFP by phone that 14 people, including women and children, lost their lives in that attack blamed on armed youths from the neighboring Twic county.

Abyei is a disputed border region between Sudan and South Sudan under UN protection since South Sudan gained independence in 2011.

The third victim died on the same week as they guarded humanitarian goods in Jonglei state, an eastern region plagued by gun violence and inter-ethnic conflict.

“In the opening days of this year, three South Sudanese aid workers who contributed to help others have paid the highest price with their lives,” OCHA’s Peter Van der Auweraert said, adding that he had been “shocked” by the killings.

South Sudan is considered one of the most dangerous countries for aid workers.

The latest murders add to the nine humanitarian workers killed last year and five in 2021.

OCHA condemned the killings and urged the authorities to reduce fire risk and to protect aid teams.

“Humanitarians are working tirelessly to serve the most vulnerable people, including women, children and the elderly with vital humanitarian assistance and attacks against them are completely unacceptable and must stop,” Auweraert said.

“I again call on relevant authorities to restore order and protect civilians, including humanitarian personnel and assets,” he added and urged “authorities to bring the perpetrators swiftly to justice.”

One of the poorest countries on the planet despite large oil reserves, South Sudan’s leadership has faced fierce criticism for failing its people and stoking violence.

Since achieving independence from Sudan in 2011, the world’s newest nation has lurched from one crisis to another, including a brutal five-year civil war between forces loyal to President Salva Kiir and his deputy Riek Machar that left 400,000 people dead.

A peace deal was signed in 2018 but sporadic bursts of violence between government and opposition forces continue to occur, while conflict between rival ethnic groups in lawless parts of the country exacts a terrible toll on civilians.