The two journalists from Royal Media Services were announced as joint winners for their Citizen TV report titled 'Dry Death' which focused on the impact of climate change on riverine ecosystems. 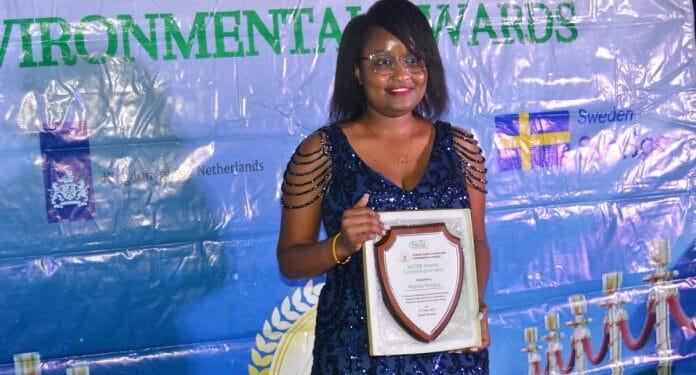 The two journalists from Royal Media Services were announced as joint winners for their Citizen TV report titled ‘Dry Death’ which focused on the impact of climate change on riverine ecosystems.

This ACCER award is an initiative of the Pan African Climate Justice Alliance (PACJA), Africa’s largest coalition of civil society groups, faiths and community-based organisations, academia, researchers and individuals who advocate for fair and just climate regimes for African people.

“As expected, the quality of entries was high and captured a wide spectrum of issues around climate change impacts on individuals, and communities. This called upon my team of jurists to extraneously subject themselves on tight timelines while adjudicating the work,” said Prof Kioko Ireri who chaired the panel of judges.

The awarding ceremony took place at a Gala Night held on the sidelines of the Commonwealth Head of Government Meeting taking place in Kigali, Rwanda.

Prof Kioko Ireri said entries by Ms Raquel and Ms Oloo were exemplary and captured the spirit of all criteria items set out in the call for entries.

Collins Osanya is a storyteller and journalist at The Kenya Times.

Somalia’s next peacekeeping mission: will it change anything?