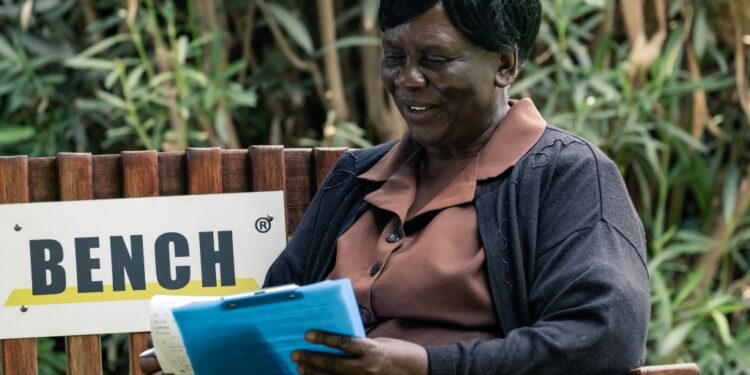 Grandma Shery Ziwakayi sits on a bench with a client during a counselling session at the Friendship Bench in Harare. A Zimbabwean doctor has come up with a novel way of providing desperately needed, yet free mental health therapy for Zimbabweans using elderly lay health workers | AFP

Sitting next to a patient with depression on a garden bench in Zimbabwe’s capital Harare, 70-year-old Shery Ziwakayi speaks gently, offering accessible therapy with a warm and reassuring smile.

“You have made the right decision to come to see mbuya”, she tells her client, using the Shona word for “grandmother” and offering a handshake.

A Zimbabwean doctor has produced a novel way of providing desperately needed mental health therapy for his poorer compatriots by using lay health workers, colloquially referred to as “grandmothers”.

Decades of economic hardships and deepening poverty have taken a mental toll on many Zimbabweans, imposing a huge burden on underfunded and understaffed psychiatric health services.

The Friendship Bench has helped bridge a shortage of professional healthcare workers in Zimbabwe — which has only fourteen psychiatrists, 150 clinical psychologists and less than five hundred psychiatric nurses serving a population of sixteen million people.

“We need these alternative innovations to narrow the gap and my idea is to use grandmothers to provide therapy,” said Chibanda, wearing dreadlocks and round-framed spectacles.

The benches are spaces “to share stories and through storytelling we can all be healed,” he said.

World Cup and WHO praise

His therapy model is now being exported to the football World Cup in Qatar, where thirty-two benches each representing a team competing in the FIFA tournament will be set up to cast the spotlight on global mental health.

The World Cup project is in partnership with the World Health Organization (WHO), who’s chief Tedros Adhanom Ghebreyesus has praised the initiative as “a simple yet powerful vehicle for promoting mental health”.

It is “a reminder of how a simple act of sitting down to talk can make a huge difference to mental health,” Tedros said recently.

Other countries to have adopted the friendship bench model include Jordan, Kenya, Malawi, Zanzibar, and the US — where 60,000 people in the Bronx and Harlem areas have accessed the therapy.

In Zimbabwe, about 70 percent of the population live below the poverty threshold.

Chibanda’s idea of friendship benches germinated after a patient he was treating at a government hospital took her life.

“She didn’t have a $15 bus fare to come to the hospital to receive treatment for depression,” he said.

“That was the initial trigger that instantly made me realize that there was need to take mental health from the hospitals into the communities.”

Grandmother Ziwakayi has offered therapy from the benches for the past six years, seeing an average of three clients a day.

“Through talking to us many have recovered and are leading normal lives again,” said Ziwakayi, who received training in basic counselling skills, mental health literacy and problem-solving therapy.

The grandmas are given a stipend for their services, and the operation is financed by Chibanda’s NGO the Friendship Bench.

Her patients come from all occupations — young, old, suffering from stress or dealing with drug addiction. Some are unemployed or in financial trouble, others are gender-based violence victims.

On a white sheet clipped to a blue handheld board, she asks clients if they are frightened by trivial things; feel run down, or have wanted to take their lives, among a host of other questions.

Choice Jiya, 43, said she owes her life to the service offered on the benches, having considered suicide when her husband lost his job shortly after she gave birth to their twins in 2005.

“Before I went to the bench for therapy, I thought killing myself was a solution,” she said.

She now operates a small business making perfumes and soap.

From just fourteen grandmothers in Mbare — Zimbabwe’s oldest and poorest township — at the start in 2006, there are now 1,000 benches and over 1,500 grandmothers in different localities.

They have assisted 160,000 people in the last two years alone.

The fall-out from the Covid pandemic has seen a spike in mental health problems and the WHO estimates that more than three hundred million people across the globe suffer from depression.

Its most recent report “paints a very bleak picture”, showing six out of ten countries with the highest suicide rates in the world are in Africa,” said Chibanda.

For Harare’s Health Services director Prosper Chonzi, the benches are a “masterstroke”.

“Demand for mental health services is high due to the economic situation. This is one of the best interventions.

“It has made a huge difference in terms of averting suicides,” he said.

US Urges Islands to Set Example for China, India on Methane