State and Religion: Why the Church in Kenya Has Failed

by John Ouma
in Kenya, Religion
0 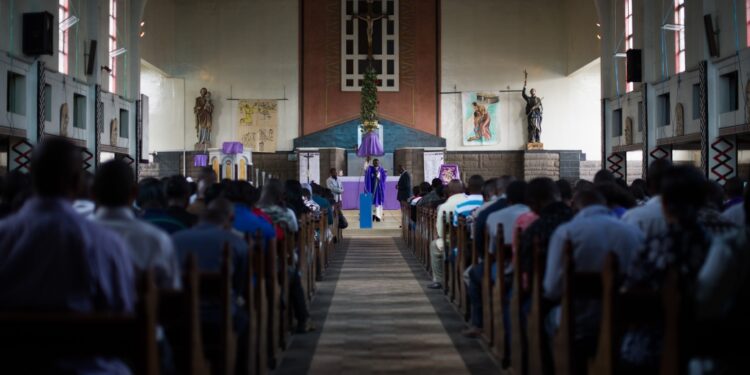 Not long ago, I asked noted cultural analyst Dr. Joyce Nyairo to comment on a draft manuscript of a book I am working on. She agreed to do so on at least one chapter – church and religion. Her argument on this question should be read by everyone alive.

“Science teaches us that when things are alike, they tend to repel. This repulsion might be what we sometimes read as a clash between church and state”, she argues.
The church, the conscience of the nation, could principally be a moral majority whose main duty, among others, is to discourage the necessary evil that is the state against unbridled bacchanalia of greed, impunity and corruption, but the church also has a founding philosophy that influences how it does its thing.

According to Nyairo, the church and state in Kenya, in truth, are two sides of the same coin, with the same aims and employing the same means to get there. In short, each has blood on its hands – the emphasis is mine, however.

The clash between the church and state might actually be competition; to arrive at the same destination; to acquire the same things. History suggests that church and state have been bedfellows for many years. In the Kenyan colonial-era, the church sometimes took progressive position on important issues. For instance, it endorsed the ban on female circumcision and acquiring huge tracts of land.

Also, in colonial Kenya, like the state, the church equally took from the people. It displaced people from their native lands through the support of the state.

Shortly after independence, the state was keen on entrenching Black dominance without fully involving the church. This strained the unholy relationship. By early 1975, a section of the church led by Bishop Henry Okullu was trying to fill the leadership void that was growing in the national consciousness as a result of state’s failure.

But the larger section of the church was either concentrating on the preservation of its influence or perpetuated state atrocities through silence. As British historian Daniel Branch notes in his book Kenya: Between Hope and Despair; 1963-2012: A greater concern for expanding influence and the rise of Pentecostalism meant clergy even in the established churches became more interested in personal morality than the constitution and in the threat of Islam and Satan than the dangers of authoritarianism.

“There can be no clash between church and state when both are using the same methods to arrive at similar ambitions – the conversion of souls and governance over the people,” Nyairo argues.

Both the state and the church bribe when they want to; they reward and dish out favors; they don’t listen to what the people need and act on collective engagement.
To understand how the church in Kenya has facilitated collapse of the national dream, we need to look at two things. One, its urge to put tribe above value; what this teaches us, as Nyairo notes, is that the church in Kenya exploits tribe in the same way that political class does.

Two, the habit of putting profits before people; the gospel of prosperity is no different from Kenyan government’s practice of tax without service which benefits the political elite with bloated allowances and salaries.

During the 2017 presidential elections, a section of religious leaders authoritatively declared that God had chosen UhuRuto – the alliance between the incumbent President Uhuru and his deputy William Ruto – and prayed away the possibility of a Raila presidency – the opposition candidate.

A separate group of religious leaders took the liberty to remind Kenyans that Jubilee administration was a curse that God was determined to do away with sooner rather than later. Both arguments were strange and lacked objective remise and moral freedom but that doesn’t mean they didn’t achieve their purpose.

Many Kenyans, lost in what political analyst Nanjala Nyabola calls political schizophrenia, voted for Uhuru because their pastor advised so. Many others voted for Raila because he had not only promised, like the Biblical Joshua, to take them to Canaan, but because their pastor insisted that he was the choice of God, and therefore voting for him was the right thing to do, as Christians.

Like President Moi who used his “generous nature” to extract personality worship from a citizenry that was grounded in social and biological poverty, Deputy President William Ruto’s generous contributions to the church in recent years – which he often describes as an investment in heaven – in anticipated exchange for political support is a perfect case of how political benevolence morphs into poverty of alternative truth. According to Nation Newspaper, at least 60 per cent of the Ksh 60 million that Ruto had donated in fund raisers between January and July 2018 went to the church. In short, the relationship between the church and the state during president Uhuru’s reign has been a complicated one.

In 2020, for instance, the Catholic bishops took down the BBI document – president Uhuru’s pet project – and termed the push to amend the Constitution as unnecessary and divisive. What many Kenyans found interesting, however, was the subject around which the church dramatically found its lost voice.

Everyone knows that the church in Kenya doesn’t have an impressive record as the custodian of the truth. But this is not to mean that the church cannot speak its truth. In any case, Supreme Council of Kenya Muslims (SUPKEM), for example, raised legitimate questions around the BBI process that could not be dismissed.

Having deciphered the loose networks of the nation’s politics, the church in Kenya transformed itself into a powerful political institution capable of prescribing, for itsfollowers, candidates to elect and those to reject in an election.
We’re a country that cannot be described as progressive. There’s a lot that has happened in the recent past as far as social (in)justice is concerned that could not, as a matter of honesty, allow us to do so.

It has always been the normative role of the church, as a moral majority, to interrogate, from time to time, the health and state of the convention on which the nation is founded.
But the religious society cannot choose which cases of social injustices to weigh in on and which ones to ignore and still remain a moral majority.

When former Independent Electoral and Boundaries Commission ICT manager Chris Msando was discovered dead one week before the August 2017 general elections, religious society wasn’t as loud as it was on BBI, for example, even when it was clear Msando’s death compromised the integrity of that election.

What did the religious society see in the BBI document that was so anti-people than the economic mismanagement, corruption, disregard of rule of law and human rights abuse that it has seen and, in certain instances, facilitated for the last nine years under the jubilee administration?

Even if some of the proposals in the BBI were retrogressive and didn’t hold the immediate aspirations of Kenyans, what prevented the church from speaking against similar advances by politicians before?

It’s hypocritical for the church to claim to have found the road to Damascus when so much evil and injustices have taken place at its door. Some of the most divisive political statements have been made at the altar of our Lord.

The church in Kenya has been captured, so to speak. Consequently, it has become a partisan institution experiencing extraordinary poverty of integrity, honor and repute that any mirror of the society must not lack. There’s the feeling that the church in Kenya isn’t speaking for the masses, but for the people who have captured it.

But how did the church end up being captured? The history of the church as a money-making enterprise dates back to its inception. Theologians draw the relevance of monetary contribution to the church from the bible. “A poor widow came and put in two small copper coins, which she had to live on,” Mark 12:44

That might be legitimate, but to a limited extent. The commercialization of the gospel has made the capture of the church easy and profitable for politicians across the world.
If president Trump was a man of easy virtue during his time at the oval house to whom honesty is almost an alien idea, American white evangelicals is an assembly of malicious Christians to whom orthodoxy is sacred.

“Trump was hired by evangelicals to defend their institutions, implement pro-life policies and appoint conservative judges… and the president has kept his side of the bargain,” Michael Gerson, American columnist, wrote in the Washington Post in 2020.

By bringing in more money to the church, politicians earn special recognition and treatment. An unofficial contract soon emerges between the church leadership and the political class that steadily evolves into a latent political statement.

When the church is deep in bed with the state, it loses its truth and its position on national issues cannot be taken seriously. In South Africa, for instance, the Dutch Reform church and the Lutheran Mission church publicly supported apartheid as a way of preserving their relationship with the state.