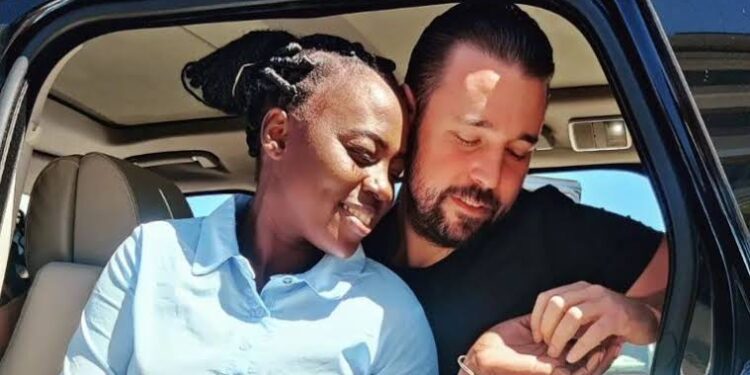 Akothee said they went for an HIV test before proceeding. Photo: Akothee.

Singer Akothee’s new mzungu lover Mr. Omosh has for the first time shared about how he met the Baby Daddy hitmaker.

Akothee’s new lover openly revealed he met Akothee through a friend of his known as Pius.

According to Mr. Omosh, Akothee was in France heading to Italy for her holidays when he talked to her via video call for the first time ever.

Omosh was smitten and asked his friend if he could convince Akothee to visit them in Switzerland.

Excited Mr. Omosh revealed that she did not care about Akothee celeb status or even got intimidated by it as he was on love with the person she is without all that.

The lad disclosed that she fell in love with Akothee because of her brains, energy, personality and beauty.

“The first day I encountered with Esther, I met her through my friend Pius who lives next to Lake Zug, she was in France heading to Italy for her holidays and after the video call I said to myself I must meet her in person. Then Pius convinced her to come over to Switzerland and on the 16th of July Esther Akoth Kokeyo was mine. I didn’t care of her status or who she is, I fell in love with her brain and spirit, personality, energy and she is beautiful.” Mr. Omosh wrote.

Mr. Omosh’s revelation did not come long after Akothee had announced her upcoming wedding.

The singer through social media disclosed she was preparing for her wedding set for 2023.

She, however, hit a snag as she encountered some challenges from her family members who did not seem happy with the news of her wedding.

Akothee and her new man have been serving perfect couple goals online, leaving her fans happy and hopeful that Mr. Omosh makes her happy.

How COVID affected markets and livelihoods in Kenya’s fisheries sector