by Anthony Wrightstone
in Entertainment, Movies
0 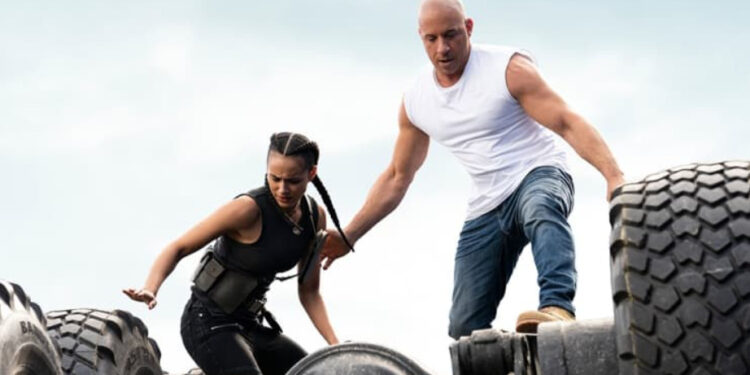 Universal’s new “F9: The Fast Saga” not only lapped all other films in North American theaters this weekend, but it also pulverized them with an estimated take of $70 million, industry watcher Exhibitor Relations reported Sunday.

The ninth installment in the “Fast & Furious” franchise, starring franchise regulars Vin Diesel and Michelle Rodriguez, opened only in theaters and had the widest release of any movie since the start of the coronavirus crisis.

Confirming the persistent appeal of fast cars and muscle-bound men, this ninth installment in the “Fast and Furious” franchise easily became the biggest money-maker since the Covid-19 pandemic began, even as one in five US theaters and most of those in Canada remain shuttered.

The plot? Suffice it to say that Vin Diesel, Michelle Rodriguez, and John Cena have to deal not only with exploding cars, plane crashes and private armies but also rocket cars, electromagnetic weapons, and ominous satellites.

Coming in second — left far behind in the dust of “F9” — was Paramount’s “A Quiet Place Part II,” at $6.2 million for the three-day weekend.

Since its release five weeks ago it has taken in $136 million domestically and $112 million overseas.

In third place was “The Hitman’s Wife’s Bodyguard,” from Lionsgate, at $4.88 million. The action comedy has Ryan Reynolds, Samuel L. Jackson and Salma Hayek reprising their roles from 2017’s “The Hitman’s Bodyguard.”

In fourth, down one spot from last weekend, was Sony’s family-friendly “Peter Rabbit 2: The Runaway,” at $4.85 million. The mixed live action/animation has James Corden voicing the title role, with live performances by Rose Byrne, Domhnall Gleeson and David Oyelowo.

So, how should Hollywood be feeling about its incipient recovery? “The industry is still settling” after its 15-month shutdown, David Gross, who runs movie consulting firm Franchise Entertainment Research, told Variety. “The effects of the pandemic will take time to heal, (but) the new normal is coming.”