Police Crack Down on Protest Against East DR Congo Force 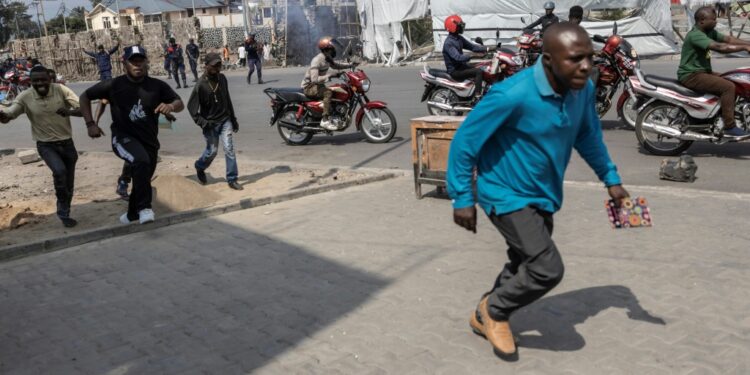 On arrival in Goma city centre, the march was stopped by police who fired tear gas | AFP

A protest an East African force deployed in eastern Democratic Republic of Congo was violently dispersed by police in Goma on Wednesday, AFP correspondents saw.

About one hundred demonstrators gathered near a roundabout to march against the East African Community (EAC) force, which they said was ineffective.

Several thousand soldiers from Kenya and Burundi have recently been deployed to support the Congolese army and UN peacekeepers fighting armed groups in eastern DRC. South Sudan’s contingent of 750 soldiers is expected to arrive soon.

“The population is tired of seeing this useless EAC force turn into an observer mission that watches how they massacre us,” said Espoir Mwinuka, an activist with the Lucha, a group of young activists, who co-organized the march.

“On the ground, they are doing nothing but serving as a shield for the enemy, so this force has no reason to be here,” said Josue Wallay, another Lucha activist.

On arrival in Goma city center, the march was stopped by police who fired tear gas.

Police and an officer threatened journalists by throwing a tear gas grenade at the group of reporters, hitting an AFP correspondent in the head.

A journalist was injured while fleeing. Two others were arrested along with six protesters and released after three hours in custody.

A historically Tutsi rebel group called the M23 took up arms again in North Kivu province in late 2021, notching up advances last year that led to the EAC’s decision to deploy the force.

The DRC’s government accuses the country’s smaller Neighbour Rwanda of aiding the M23, something that Kigali denies.

Since the end of October and despite declarations of a ceasefire and troop withdrawals, M23 has continued to clash with the Congolese army and other armed groups.

DRC Foreign Minister Christophe Lutundula on Wednesday accused the M23 “and the Rwandan government which supports them” of “once more failing to uphold their commitments.”

DR Congo is determined to “safeguard its territorial integrity,” Lutundula said in a statement, warning that “all means” would be deployed to that end.

Scores of armed groups roam eastern DRC, many of them a legacy of two regional wars at the end of the 20th century that claimed millions of lives.

In neighboring Ituri province, activists on Wednesday began a three-day protest aimed at shutting down the provincial capital Bunia over failures to tackle civilian deaths by armed groups.

“More than 80 civilians have been killed since the start of the year,” said Dieudonne Lossa, a spokesman for civil society groups.

Both Ituri and North Kivu have been under a so-called state of siege since May 2021 an emergency measure under which senior civilian officials have been replaced by army or police officers to speed up action against armed groups.

Despite the initiative, massacres of civilians have continued unabated.