Climate Change is Responsible for the Devastating Floods in Nigeria, Study Suggests

Such rain would have been extremely rare without human-caused heating

by John Ouma
in Environment
0 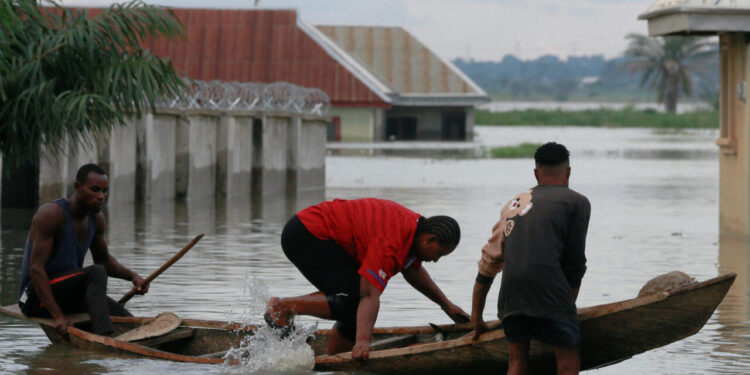 A recent study has established that massive floods in Nigeria, Niger and parts of Chad “were made about 80 times more likely by the climate crisis.”

Thanks to global heating, the floods were among the deadliest on record in the region. Hundreds of people were killed, 1.5 million were displaced and more than 500,000 hectares of farmland was damaged, per Guardian’s Damian Carrington.

Done by an international team of climate scientists as part of the World Weather Attribution (WWA) group, the study utilized “weather data and computer models to compare the likelihood of the heavy rain in today’s heated world versus a world without global heating.” Such rain, Carrington notes, would have been extremely rare without human-caused heating but is now expected once a decade.

According to the study, “the reason the floods were so disastrous was that people in the region were already very vulnerable to extreme weather, as a result of poverty, violent conflicts and political instability.”

“As scientists, we’re not in a position to tell Cop27 negotiators whether it needs to be a loss and damage fund, or a facility, or a mosaic of solutions, as are all being discussed,” he offered.

Adding that, “what is very clear from the science is that this is a real and present problem and that it’s particularly the poorest countries that are getting hit very hard, so it’s clear that solutions are needed.”

Weighing in on the findings of the study, Prof Johan Rockström, the director of the Potsdam Institute for Climate Impact Research, said “analyses like those from the WWA clearly showed the link between global heating and climate disasters; legitimacy of loss and damage has never been as high as today.”

'Brazil is back': Lula Draws Crowds at UN Climate Talks

TSC Boss Macharia Orders Teachers To Be Released For Polls