by John Ouma
in Long Reads
0 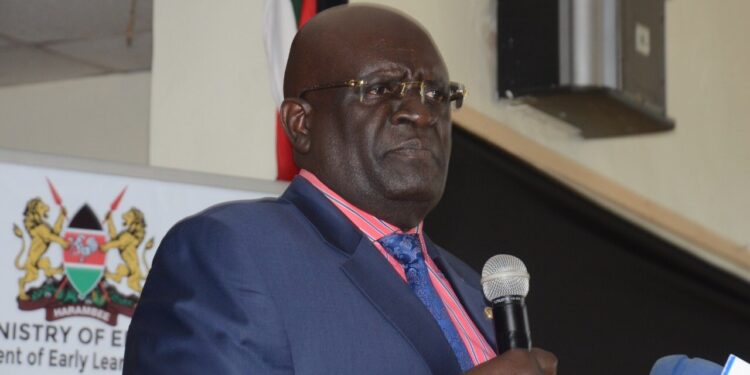 In a press briefing in August 2020, outgoing Education Cabinet Secretary George Magoha issued a pretty bad press for the media for what he termed as the tendency of journalists to “mislead” the public. He was speaking at the soundtracks of the anticipated reopening of schools after the months-long lockdown.

Asked by a reporter why teachers were required to report to school on September 28, Magoha said: “To prepare for the reopening of the schools. …which part of English don’t you understand.” Someone who was listening to Magoha’s press briefing for the first time would equally reprimand the reporter for asking a foolish question, the stuff of lazy journalism.

Described by some as belligerent, Magoha will be remembered as one of the most mechanical, paternalistic cabinet secretaries with extremely pathetic communication skills in recent Kenyan history.

In March, he made a disturbing statement to the effect that gay students should not be allowed to attend boarding schools. While there are those, especially among the religious society, who found his remarks excusable, majority agreed that they were repressive including the LGBTQ groups that took to the streets the following week to protest against victimization of gay students.

When students needed coherent guidance during lockdown on what they were going to do with their lives when Sars-cov-2 decided to turn our world into something we had not seen before, Magoha did what he does best: flip-flopping.

For six months, he drove huge clouds of anxiety in the mental faculties of students and parents with his conflicting statements. At one point he said it was not his place to tell when schools would reopen, then he said as far as he was concerned, learning was going on online. Later, in June, he announced that schools could reopen in January 2021 before reversing, that, following drop in Covid-19 cases, schools were likely to reopen in October.

These contradictory statements, as we have said, caused confusion and apprehension among students and parents. The media could have contributed to some degree in creating the confusion, but Magoha did little to resolve the situation.

When Covid-19 Education Response Committee announced on July 7, that 2020 academic year was cancelled and that schools would reopen in January 2021, the media disregarded on purpose the last paragraph of that letter – which stated that reopening of schools was subject to the situation of Covid-19 in the country – and reported that 2020 was a lost academic year.

What most people asked was why Magoha did not come out to set the record straight that the academic year 2020 was not as yet lost as the media widely reported. Why did he allow the media to “mislead” the public? More than that, in July that year, Magoha announced that the government would support public universities that lacked technological infrastructure to carry out online learning.

Only rugged individualists can claim that some form of learning had been taking place online during the lockdown. Encased in a shell of social inequality, our education system disadvantages students from low-income backgrounds. In short, online learning was and is for the privileged urban middle-class.

By assuming that there was some form of learning taking place online, Magoha succumbed to elitist thinking; the habit, prevalent among people of means, of doing things in ways that suggest there is a state within the Kenyan state in which the haves live.

It was not just about the reopening of schools. Psychosocial preparedness of students to return to class in completely different environment was one factor that ought not to have been overlooked had Magoha cared to make us of the numerous ophthalmologists in the country.

Preliminary research indicated that psychological impact of school closures and academic delays during lockdown had worsened mental health conditions of significant number of students across the world.

Stakeholders in the education sector, mostly the students, expected Magoha to be in a position to give clear guidance on school reopening, but the edict-issuing, medical professor increasingly behaved in a manner that suggested he lacked such powers.

There were also concerns about safety in learning institutions. If Covid-19 Education Response Committee reached the decision to cancel 2020 academic year in the interest of students’ safety, and to make necessary preparations for reopening, were those conditions met? No. In principle, most institutions could not facilitate safe learning even though Magoha, for some reason, could not say so.

The condescending attitude with which he entertained questions from journalists during his time at Jogoo House “B” represented what Frantz Fanon called “narcissistic monologue of the colonized bourgeoisie”. Understood in this context, monopolization of public information is neo-colonial. Decisions are made by those in positions of authority without involving the very people to whom those decisions are to apply.

Everyone knew, including Magoha himself, that with the job losses and reduced incomes occasioned by the pandemic, parents needed enough time to prepare adequately for school reopening. Transferring students who could not afford private schools to public institutions at short notice, as Magoha recommended, could have caused psychological impact on students had it been implemented.

Had Magoha been clearer and consistent in his communication, reassuring and less dismissive during lockdown, perhaps anxiety and depression would not have visited students and parents in the proportions that they did.

As one columnist noted in 2019, Magoha, may be many things, as his CV attests, but he is not an educationalist. He is too mechanical; too paternalistic; too abrasive; and has extremely pathetic communication skills. (The emphasis is mine).

Shakespeare said that all is well that ends well. Magoha’s tenure at the Ministry of Education was horrendous, but it is well that, with nobody going to jail, it has ended just well.  Hurrah!

CBK to Gachagua – We Don’t do Private Transactions