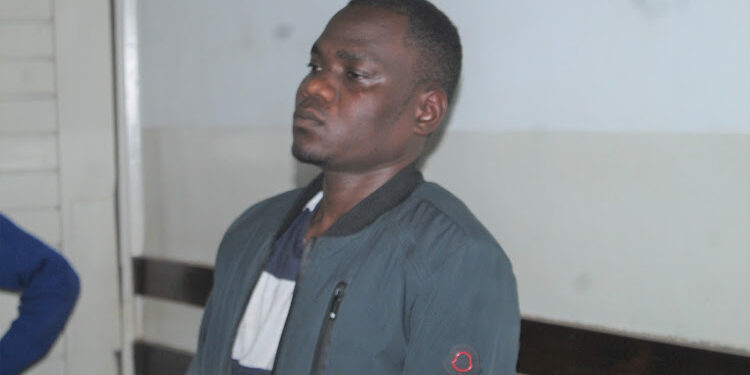 Dan Simiyu at the Kibera court.He is charged with stepping on his wife's abdomen.Photo/Courtesy

A Kibera man has been charged for steeping on his pregnant wife’s abdomen.

Dan Simiyu allegedly stepped on his wife’s abdomen, squeezed her throat and beat her up.

He allegedly committed the offence on November 10 at Darajani, Kibera subcounty in Nairobi.

He is said to have attacked Junicai Simiyu, his wife, whom he found relaxing on a chair in their house.

Simiyu had accused his wife of sleeping with other men.

He allegedly assaulted her and told her to pack and go with further instructions of terminating the said pregnancy.

The complainant was rescued by some of her neighbours who heard her crying for help.

She was the rushed to the hospital.

The accused person was however released on Sh20,000 cash bail and the court directed that the matter be mentioned on November 21.

The court also directed that the accused person be supplied with witness statements and documentary evidence that the prosecution will rely on during the entire case.