With his eyes fixed on 2032,the Prime Cabinet Secretary is out to stem divisions that have denied him absolute control over the vote rich region

by Jackson Okata
in News, Politics
0 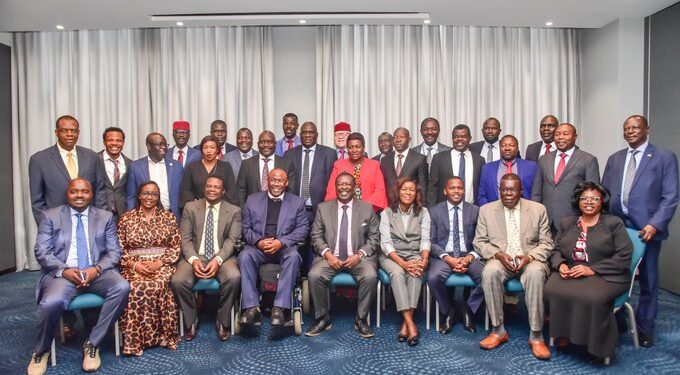 Prime Cabinet Secretary Musalia Mudavadi is out to consolidate his support base in the Luhyia region ahead of the 2032 succession politics.

During the meeting,the leaders resolved to work together for the development of the region.

The leaders were drawn from across the political divide and the five counties of Vihiga, Kakamega, Busia, Bungoma ,Trans Nzoia and Nairobi.

The leaders resolved to work together and consult each other on matters beneficial to the region under the leadership of the Prime Cabinet Secretary and National Assembly Speaker Moses Wetang’ula who had sent his absence apology.

“If I stepped on you, forgive me. It has been a game of politics but it’s time we all now put that behind us and forge a united team,”

“Elections are over and it’s time to heal, and hug each other and say ‘sorry it was just elections’ and move on for the sake of development of our communities,”

Mudavadi  wants  the leaders to put aside their political affiliations and prioritise the region’s interests by approaching issues affecting the people from a united front.

“I want us to start talking and engaging each other from all fronts. I want you to know that I am free and available for you.

“As we said during the campaigns, this is an open Government and as such, let us be free with each other,” he told the legislators.

Further,Mudavadi called on the leaders to take stock of the audited projects and compare with what is on the ground to ascertain their existence.

“There are instances where what is in paper is not on the ground. Projects are filed as to have been completed but in reality, money has been swindled and there no projects.

“Such are the issues that you need to bring to our attention,” he said.

Mudavadi is keen on uniting the Luhyia voting bloc,something that has been elusive for the past 5 general elections.

The meeting was attended by over 35 legislators