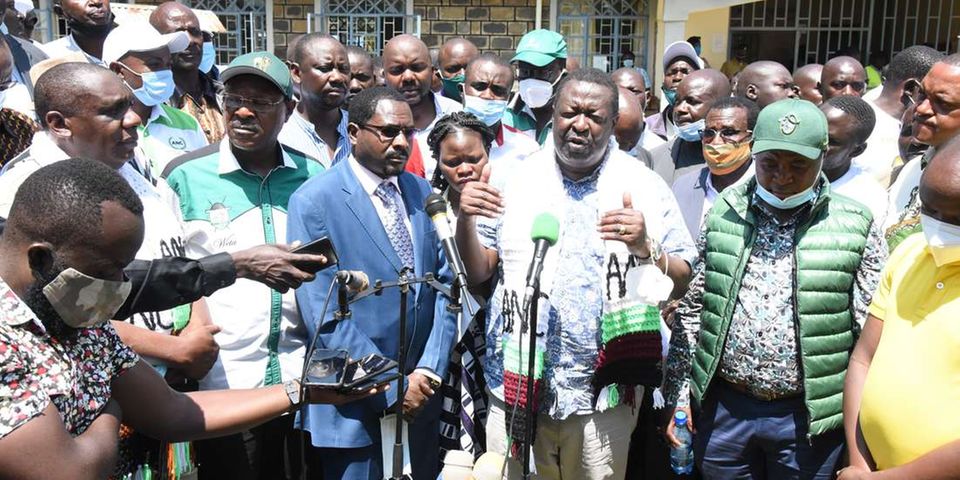 Mudavadi faulted Raila’s decision to contest for the presidency in 2022, especially after his handshake with President Uhuru Kenyatta, which destroyed the National Super Alliance (NASA) coalition.

Mudavadi Fooled
The ANC leader’s claims came hours after reports emerged that Raila would be one of the candidates contesting for the ODM party’s presidential ticket.

Raila and governors Hassan Joho (Mombasa) and Wycliffe Oparanya (Kakamega) had all declared interest to run for the top seat on an ODM ticket, according to the reports.

However, Mudavadi, in an interview with The Standard, said the NASA coalition agreement was that ODM would not produce a presidential candidate in 2022 because they had one in 2017.

NASA Coalition
In the 2017 General Election, Mudavadi teamed up with other NASA principals, Kalonzo Musyoka (Wiper) and Bungoma senator Moses Wetang’ula (Ford Kenya), to back the ODM leader’s presidential bid.

The ANC leader, Kalonzo and Wetangula have since shifted their allegiance and formed the so called One Kenya Alliance, which brought on board KANU chairman and Baringo senator Gideon Moi.

“The agreement is in the public domain; the party that produced the presidential candidate in 2017 would not get one next year, but in Kenya, political deceit is a pandemic,” said Mudavadi.

Mudavadi nevertheless admitted that Raila has the constitutional right to contest and that the ODM leader’s candidature was ‘expected’. “I anticipated it; it is not a new development for him to go for the last bullet,” said Mudavadi.

However, the Orange party later issued a clarification stating Raila did not apply to be a presidential flag bearer as it was being reported.