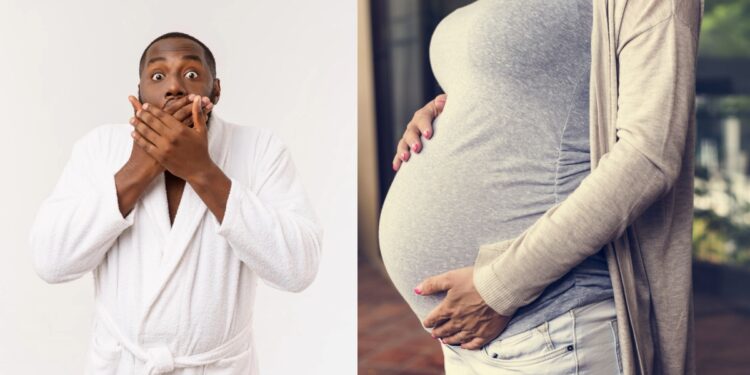 The pregnant lady cheated on her hubby with a pastor. Photo: UGC.

Kenyans on Twitter have caused a melee after a video of a pregnant woman cheating on her husband on their matrimonial bed emerged.

It is not yet clear if the video is old or was taken recently but the lady’s actions left jaws on the floor, with quite a number of tweeps wondering if she is mentally stable.

The video which has fast gone viral on Twitter was actually captured by the husband to the woman, identified as Martha as he walked in on her having relations with a strange man.

In the video, Martha could be seen alighting from the bed as the man she was cheating with hurriedly tries to wear his trousers.

The bedroom had some lit candles and other paraphernalia which looked like tools of the trade for a witch doctor.

Here are some tweets;

Martha’s husband is Uncultured man! How can he expose the wife like that these things happens, you pray, forgive and rebuke the devil in your marriage. Wait! But did Martha really made her matrimonial bedroom a shrine with a Prophet? After God, Fear Women pic.twitter.com/o7kqLgd7bR

Ati what a man can do a woman can do it better and martha took this one personal this is heartbreaking 💔😢 pic.twitter.com/pX1EqDRItw

I don’t understand that video, why is Martha cheating while pregnant 😩

Martha aside , this man is even a Pastor 🤣 pic.twitter.com/AfER4CU7fc

When you watching that leaked video of Martha, then you remember your girlfriend is called Martha😹😹💔 pic.twitter.com/QAMBu0KLK3

Some of the people who shared and commented on the video claimed the man who was caught with the pregnant woman is her pastor and they were in the process of cleansing her as she approaches her due date.

Pastor or not, special prayers or not, netizens strongly condemned Martha with quite a throng warning men to always fear women.

According to many, women can hurt men who love them, and Martha has perfectly proven the same with the video.

At the time of filing this report, Martha and the video were trending on Twitter with more people sharing it even further.

NMS To Formally Transfer Functions Back To Nairobi County Government

Salim Lone: “Mike Sonko misled Kenyans in claiming I was his source regarding news of Mr. Njonjo’s ‘passing'”

Is The Shamba System Ideal For Kenya?