by Jackson Okata
in News, Politics
0 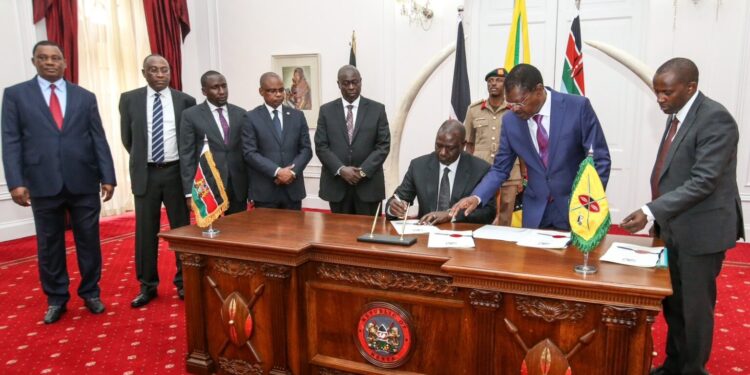 President William Ruto when he signed into law the IEBC (Amendement) Bill into Law at State House, Nairobi.Photo/PCS

President William Ruto has set in motion the process of recruiting new IEBC commissioners after signing into law the Independent Electoral and Boundaries Commission (Amendment) Bill .

The Bill  was adopted by the Senate last week during a special sitting.

Ruto is set to appoint a seven member selection panel that will be tasked with the recruitment of the new Independent Electoral and Boundaries Commission chairman and commissioners.

The Selection Panel will oversee the filling of vacant positions in the Independent Electoral and Boundaries Commission.

Three other commissioners including Juliana Cherera, Francis Wanderi and Justus Nyang’aya resigned following the formation of a tribunal to probe their conduct during the August 2022 general elections.

Commissioner Irene Masit opted to defend herself before the Justice Aggrey Muchelule led tribunal that resumed its sittings on Monday, 23, 2023.

The amendment new law will see the allocation of the Parliamentary Service Commission in the panel reduced to two from the current four of the seven members of the Panel.

At the same time, the Political Parties Liaison Committee, LSK and the Public Service Commission will each nominate one member to the Panel.

The Parliamentary Service Commission and the Inter-religious Council of Kenya will each have two members.

“Don’t Send Away Students Over Fees,” Magoha to Schools

Women of Colour are Systemically Excluded in Newsrooms, Report Says