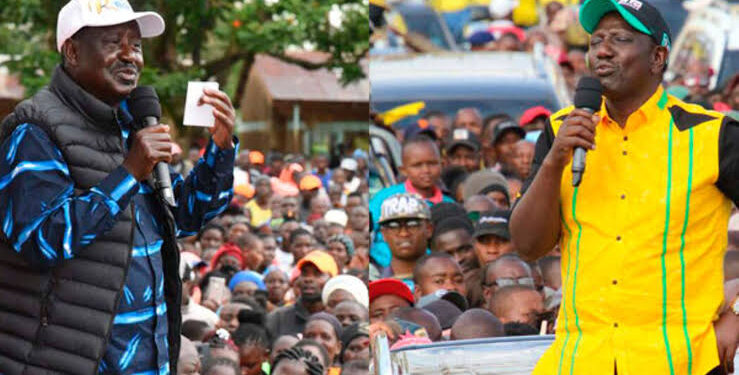 With two more days to the general election, the two presidential big wigs are set to hold their final campaign rallies on Saturday, August, 6.

Deputy President William Ruto of Kenya Kwanza Alliance and Raila Odinga of the Azimio One Kenya Coalition will host their last mega rallies to woo and encourage voters to turn out in large numbers and cast their votes on August 9.

Moreover, the Azimio team will pitch camp at the Kasarani Stadium whereas the Kenya Kwanza camp will host theirs at the Nyayo National Stadium.

Similarly, Ruto was elected together with President Uhuru Kenyatta, but they have since fallen out.

The fallout between the two has seen the deputy president sidelined after Uhuru Kenyatta shook hands with his former political rival of Odinga in March 2018.

Furthermore, the rallies set for Saturday, August, 6 will mark the end of the campaign period in accordance with the law and the Independent Electoral and Boundaries Commission’s timelines and regulations.

Meanwhile, Raila Odinga who is currently enjoying the support of the incumbent President Uhuru Kenyatta is seeking the country’s top seat for the fifth time in a row. However, William Ruto will giving his first shot to presidency.

Nonetheless, other candidates vyung for the presidential post include David Mwaure of the Agano Party and George Wajackoyah of the Roots Party.

IEBC To Deploy Manual Registers As Directed By High Court