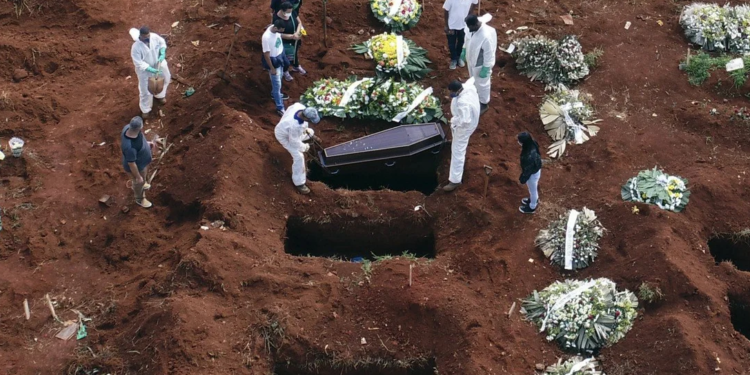 AP | Cemetery workers in Brazil bury a victim of Covid-19, which has now claimed 3 million lives around the world.

Just over a year since Covid-19 was declared a pandemic, the world crossed a threshold on Saturday with the global death toll reaching a staggering 3 million lives, amid repeated setbacks in the worldwide vaccination campaign and a deepening crisis in places such as France, Brazil and India.

The number of lives lost, as compiled by Johns Hopkins University, is about equal to the population of Kyiv, Ukraine; Caracas, Venezuela; or metropolitan Lisbon, Portugal.

It is bigger than Chicago (2.7 million) and equivalent to Philadelphia and Dallas combined.

And the true number is believed to be significantly higher because of possible government concealment and the many cases overlooked in the early stages of the outbreak that began in Wuhan, China, at the end of 2019.

Even as the roll-out of Covid-19 vaccines has brought hope for an end to the pandemic, cases are again surging in some regions, driven in part by new, more transmissible variants of the virus.

“Around the world, cases and deaths are continuing to increase at worrying rates,” WHO director-general Tedros Adhanom Ghebreyesus said on Friday.

“Globally, the number of new cases per week has nearly doubled over the past two months. This is approaching the highest rate of infection that we have seen so far during the pandemic.”

The surge is a major setback from the start of the year, when new global cases declined for six weeks.

Since mid-February, new infections have been on the rise again – a phenomenon experts attribute both to the relaxing of control measures and more transmissible variants – along with the inevitable rise in weekly global deaths.

Brazil and India are at the forefront of the present crisis, with hospitals overrun as cases have spiked in recent weeks.

Brazil’s death toll recently crossed 4,000 in one day, while India saw over 180,000 new infections in one 24-hour span during the past week, bringing the total number of cases to over 13.9 million..

Problems that India had overcome last year are coming back to haunt health officials.

Only 178 ventilators were free Wednesday afternoon in New Delhi, a city of 29 million, where 13,000 new infections were reported the previous day.

The challenges facing India reverberate beyond its borders since the country is the biggest supplier of shots to COVAX, the U.N.-sponsored program to distribute vaccines to poorer parts of the world.

Last month, India said it would suspend vaccine exports until the virus’s spread inside the country slows.

In the U.S, where nearly a quarter of the population is fully vaccinated, infections are again on the rise.

While these three most affected countries continue to add the greatest number of cases to the global total, parts of Europe and South America are also seeing spikes.

The WHO has been urging individuals and governments not to lower their guard too soon, stressing that social distancing measures remained critical before vaccination was widespread.

Early evidence from some places with high vaccine uptake has been positive, with reductions in new cases and deaths among immunized groups.

But vaccine inequity remains stark, with only one in more than 500 people vaccinated in low-income countries, and around one in four in high-income ones, according to the WHO. Supply shortages are expected to persist for months to come.

Two jabs expected to play a significant role in vaccinating people in the developing world have been investigated by regulators for possible links to rare but serious blood clotting.

The rollout of a vaccine by Johnson and Johnson was put on pause in the United States and Europe last week, while six cases among nearly 7 million Americans given the dose are under review.

European regulators earlier this month found a “possible link” between serious blood clots and a vaccine by British-Swedish firm AstraZeneca, but said the risks outweighed the benefits, as the condition is very rare.

Worldwide, more than 869 million shots have been given, according to Bloomberg’s vaccine tracker.

As the world waits for more doses to come online, some experts say vaccines alone may not be enough to stop the spread of the disease in the short-term.

“We are in a race with our vaccine campaign, but it might be a profound error to think that we can win the competition against the pandemic just by vaccinating people,” said Antoine Flahault, director of the Institute of Global Health at the University of Geneva.

“At least in the countries which have succeeded to contain the viral circulation at the lowest possible level, vaccines will make people feel safe in their social and economic activities.”

However, nations that do not focus on also controlling the disease through social measures, “may suffer much longer from attacks of new variants, because they allow them to circulate and develop”, he said.