Israel and Turkey announce a new era in relations. 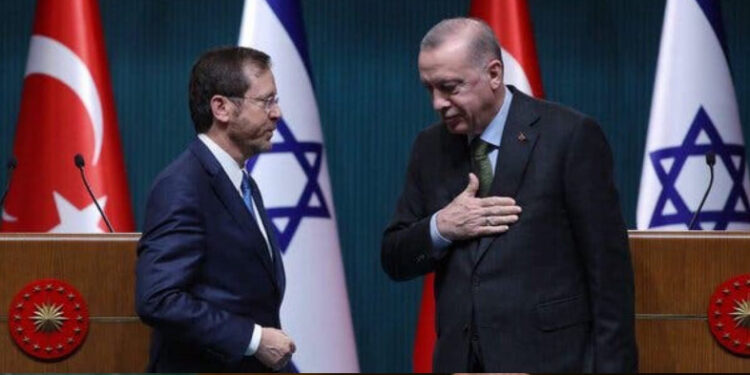 981
SHARES
6.8k
VIEWS
Share on FacebookShare on TwitterShare on WhatsApp

Erdogan rolls out the red carpet for Israeli President Isaac Herzog and calls it a turning point in history. For Pakistanis, Erdogan and fans have been promoting Ertugrul and Turkish Khilafah that he doesn’t believe in.

In a step that has sparked popular anger, ‘Israel’ and Turkey have announced a new era in relations, following more than a decade of diplomatic rupture, as Israeli President Isaac Herzog visited the Turkish capital, Ankara.

Herzog becomes the first Israeli leader to meet with Erdogan since 2008.

After EastMed, which is Israel’s plan to transport natural gas to Greece via The Mediterranean breaks down, it’s thought that natural gas to Europe will start to be transported through Turkey.

Erdogan proposed to the Israeli President a gas pipeline that would connect Israel-Turkey with Europe.

EU, after the hard lesson on energy dependence on Russia, should not place its dependence on Turkey. Enough on the blackmail with refugee flows.

Pipelines only on EU territories

Turkey has agreed to give Israel the Shiloah Inscription, discovered in Jerusalem’s Shiloah water tunnel in 1880.

This is one of the most important archaeological finds ever discovered in the Land of Israel.

In the last couple of years, the changing geo-political and geo-economic dynamics have put Turkey on a path of rapprochement. Post-Arab Spring Turkey’s relations deteriorated with many countries.

But now Turkey is trying to repair ties with all these countries. Israel is the latest addition to the list. This visit of any Israeli President to Turkey in the last 15 years came after months-long back door negotiations and diplomacy.

Turkey is also trying to improve relations with Egypt.

This is evident from the fact that the main focus of this rapprochement with all these countries is “Economy”, Erdogan is well aware of the fact that FP does not play a major role in the local politics of Turkey & fall of Lira will have implications for his coming elections.

The goal is to secure the economy and avoid any sanctions and major opposition in the coming elections.

On social media different videos are spreading one of them is the youth protesters from Anatolian Youth Association (AGD) removing Israeli flags flown in celebration of Israeli occupation’s President Isaac Herzog’s visit to Turkey and replacing them with a Palestinian flag.

I am a Tailor Too – Former Attorney General Githu Muigai Reveals