Christian Extremism x Trump: The Church in Bed with the State 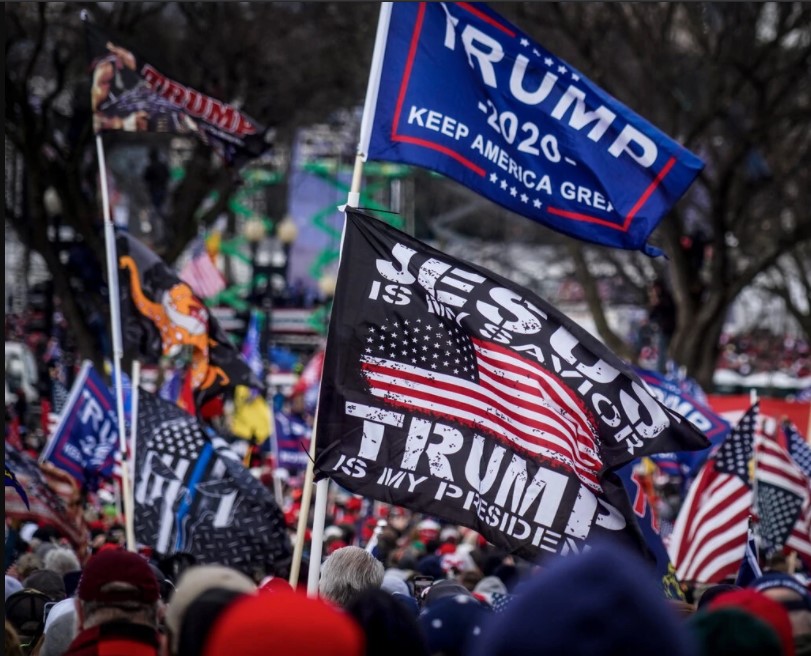 On January 6, 2021, the world watched in disbelief and horror as the USA skated dangerously close to the edge of what current US President Joe Biden later termed “an uncivil war.”

Armed mobs stormed the Capitol building in Washington, DC, egged on by several forces—the outgoing President Trump, many Republican leaders, and Christian leaders who supported the “stop the steal” movement, despite the glaring lack of evidence.

The rioters disrupted legislative business, destroyed federal property, and openly stated their intent to inflict violence on lawmakers, who were certifying the results of the 2020 presidential election. All the accounts in the aftermath described the insurrection as an attack on democracy.

How did the US stray so far from its venerated democracy?

Trump’s Rise to the Presidency
Flash back to 2016 when Trump won the Republican nomination for presidential candidate. Against all odds. Few had taken him seriously at the beginning of his campaign, but Trump proved skillful at tapping into, articulating, and feeding the fears and frustrations of white conservatives.

He swept into office as the 45th President of the US and spent four years rubbishing the title and the office. He elevated and legitimized white supremacy, stoked the fires of division, alienated international allies, fawned over despotic leaders in other nations, and generally lambasted all boundaries of common decency.

Unthinkably, the US president was the biggest and worst public bully in the world.

Republican leaders supported, defended his autocratic moves, and bad behavior at every turn, while using him to advance their conservative agenda. Prominent Christian leaders bartered their support and that of their congregations for a seat at the power table. So much so that after the November 2020 election, these Christian leaders, especially those who had prophesied a second presidential term for Trump, publicly proclaimed that the election had been stolen and pushed, along with Republican leaders, for the results to be overturned.

The History of Church-State Entanglement
The Church is not new to a marriage of convenience with the State. This drama has been reenacted over and over for centuries—at least since the Roman Emperor Constantine embraced Christianity as his religion, legitimizing it when he ascended to the Roman throne in AD 324. In return, the Christian leaders of the day made room for Constantine, a narcissist not unlike President Trump, to shape their religion and style himself as god sent and legitimized by the Church. Sound familiar?

Republican Christianity is driven by the recognition that a large base of American Christians can be mobilized by pandering to their pet agendas of opposing abortion and same-sex marriage, or anything else that the Church deems can lead to an erosion of Christian morals.

God forbid that a Christian should be a Democrat or an Independent—as though God himself were a Republican!

The Downward Spiral into Christian Extremism

How is it that millions of educated and otherwise critically thinking people (skills many require for their jobs) were—and still are—swayed by “rubber prophecies,” QAnon conspiracies, and leaders without character—both in the pulpit and the political arena? How is it that people who would never pick someone like Trump as their workplace manager chose him to lead their nation?

Is it the emotional appeal of these celebrity political candidates and far-fetched campaign promises? A misguided loyalty to celebrity church leaders, specific church groups and denominations, and questionable teachings and sermons?

Do they not see how religious and political leaders court each other for the mutually beneficial pursuit of power, money, and fame? All the while, pulling the wool over the eyes of their supporters with slick rhetoric and cultures that discourage questioning and critical thinking.

Behind the Scenes of the Current Church-State Entanglement

The desperation of white conservatives to hold onto power in the face of the rapidly changing demographics of the United States has revealed the ugly truths lurking in the underbelly of the nation: Their vision of a great America is one in which a white majority rules over the rest, infringing on their civil and political rights, especially those that do not conform to Christian ideals.

The white evangelical Church has played a crucial role in sustaining and legitimizing the systemic racism that propped up the founding of this nation—consider the plight of Native Americans, African Americans, Latinos, Asians, and other non-whites. Conservative political leaders and the Christian right work hard to maintain the status quo, fearful of what may happen to them when tables turn, and whites are no longer the majority. Fundamentally, this is the drive behind the desire to return to an earlier time when America was “great.”

Hope for Change?
Is there hope for change when 74.2 million Americans—46.8% of the votes cast in 2020—continue to support an openly racist, openly lying, autocratic figure, who constantly displayed his incompetence during the four years of his presidency?

Can the twisted and intertwined roots of Christian extremism, systemic racism, and conservative politics be unraveled? Surely, this is not what Jesus Christ envisioned: A Church sneaking into bed with the state in pursuit of power, money, and fame.