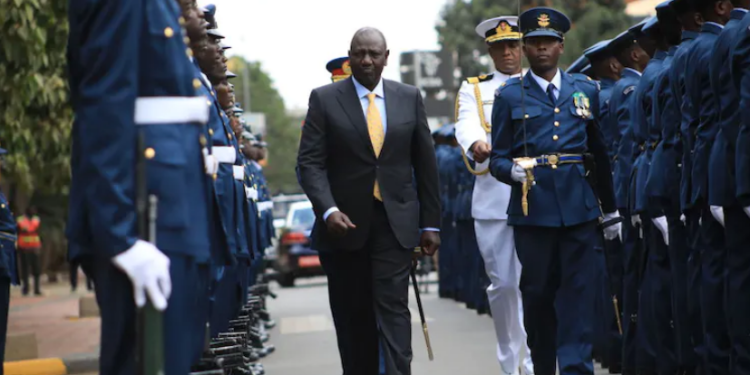 A member of parliament in Kenyan president William Ruto’s governing coalition created a firestorm by suggesting that there was a plan to remove presidential term limits in the country.

The extent of support for the plan within the president’s party, the United Democratic Alliance, is not clear. In early November 2022, the member of parliament, Salah Yakub, mentioned only that there had been “closed-door discussions” on it.

Yakub is a first-time member of parliament.

The United Democratic Alliance distanced itself from Yakub’s statement on the day it was reported.

Remarks by Fafi MP Salah Yakub that there are plans to extend term limits for the President are a product of a fertile imagination by the legislator. UDA distances itself from the utterances by the MP.

If, however, the idea was ever realized, it would mean that Ruto, who is 55 years old, could potentially seek re-election for three additional terms.

His main political adversary, Raila Odinga of the Orange Democratic Movement party, would effectively be prevented from ever running for president again – he is 77.

Kenya’s term limit was introduced before the 1992 elections and retained in the country’s 2010 constitution. The country is still considered a beacon of democracy in a region pervaded by dysfunctional and non-democratic regimes.

Yakub’s view is that:

if a president is doing a good job, then he or she should not be limited by terms.

This mis-states the function of term limits.

They’re not designed to discourage poor performance. The Kenyan constitution provides other ways of dealing with presidents who engage in gross misconduct.

The purpose of term limits is to minimize corruption and abuse of office, open the government to new people and ideas, and infuse the government with more innovative and creative ways to solve national problems.

Most importantly, term limits reinvigorate the country’s democracy and curb the potential for monopoly. They protect the democratic system from turning into a de facto dictatorship and prevent the incumbent from becoming a president-for-life.

Term limits are especially important in a country such as Kenya where most citizens still believe that an incumbent administration will favor the president’s ethnic group.

Fortunately for Kenya and its democracy, it will be difficult for any government to get rid of term limits.

The constitution provides complex mechanisms for amending certain fundamental provisions, including the term limit for presidents. One of the requirements is that the proposal would have to be approved by Kenyans in a referendum. Voters are unlikely to accept any efforts to interfere with what is a robust and effectively functioning constitutional system.

What stands in the way of changing term limits

Kenya’s constitution sets down the process for amending its provisions. Changing the president’s term requires:

These provisions show that the drafters of the 2010 constitution were aware of the importance of constitutional stability and predictability. They were also alive to the value of certain provisions in the proper and effective functioning of the country’s democratic institutions, and the rule of law.

This explains why the drafters adopted more stringent mechanisms for amending democracy-enhancing provisions, which, apart from the presidential term, include those protecting judicial independence and those protecting fundamental freedoms as set out under the bill of rights.

The conditions for securing changes to the constitution are designed to allow Kenyans to participate fully in amendments that could radically alter the nature of their democratic governance architecture.

The 2010 constitution was expected to provide more peaceful mechanisms for dealing with election-related disagreements. A dispute over the presidential results following the 2007 election led to widespread violence that killed more than 1,000 people and displaced hundreds of thousands. After elections in 2013, 2017 and 2022, Kenyans made use of constitutional mechanisms to peacefully resolve related disputes.

Thus, Kenyans have gradually come to accept and respect the rule of law.

It’s not likely that a constitutional amendment to change the presidential term would garner the two-thirds majority in parliament.

First, the ruling party doesn’t hold a two-thirds majority in either house or would need the support of the opposition. The opposition is not likely to grant it, considering the amendment could significantly enhance the president’s ability to remain in power for more than two terms.

Second, Kenyans would probably see the amendment as a naked power grab and a danger to their constitutional order. They could punish the proposal’s supporters during future elections.

Third, the complex and prolonged process involved in amending the constitution could derail Ruto’s policy agenda and reduce his re-election prospects.

This is not the first time that politicians have proposed amendments to presidential term limits. It came up when former president Mwai Kibaki wound up his term of office in 2012.

It was inferred in the failed 2020 effort to amend the constitution. There were also those who thought that at 61, former president Uhuru Kenyatta was too young to leave office in 2022.

None of these efforts moved beyond politicians’ wishes. Opportunistic constitutional changes are unlikely to succeed, given the scrutiny from the courts and Kenya’s robust civil society.

In my view, the main party in the ruling coalition should have issued a much stronger statement than it did against the suggestion to increase the president’s term limit. It should have condemned the effort as undemocratic and designed to weaken Kenya’s relatively robust democratic institutions and the rule of law.

John Mukum Mbaku is a Brady Presidential Distinguished professor of economics and John S. Hinckley Fellow at Weber State University. He is also a nonresident senior fellow at The Brookings Institution in Washington, D.C., and an attorney and counselor at law, licensed to practice in the Supreme Court of the State of Utah, the U.S. District Court for the District of Utah, and the U.S. Supreme Court. He received his PhD in economics from the University of Georgia and his JD in law and graduate certificate in natural resources and environmental law from the S. J. Quinney College of Law at the University of Utah. He is a resource person for the Kenya-based African Economic Research Consortium. Professor Mbaku also holds a B.S. (Chemistry) from Berry College (Mount. Berry, Georgia), a B.A. (French Language and Literature) from Weber State University (Ogden, Utah), and an International MBA (IMBA) from the University of South Carolina. His research interests are in public choice, constitutional political economy, sustainable development, law and development, international human rights, intellectual property, rights of indigenous groups, women and children, trade integration and institutional reforms in Africa. Mbaku is the author of Corruption in Africa: Causes, Consequences, and Cleanups (Lexington Books, 2010) and (with Mwangi S. Kimenyi) of Governing the Nile River Basin: The Search for a New Legal Regime (The Brookings Institution Press, 2015) and Protecting Minority Rights in African Countries: A Constitutional Political Economy Approach (Edward Elgar, 2018). On May 22, 2017, John Mukum Mbaku, was admitted and qualified as an Attorney and Counsellor of the Supreme Court of the United States. At Weber State University, John Mukum Mbaku teaches courses in principles of economics, intermediate microeconomics, international trade, business calculus, and economic development. He also works with international students and helps them adjust to college life in the United States. Professor Mbaku also engages with community groups and helps them understand issues such as globalization, outsourcing, and immigration and how they affect economic activities in the United States. Professor Mbaku also visits local schools to talk to students about the U.S. constitution, constitutionalism and the rule of law in the United States and other countries. He is a consultant to several domestic and international news organizations, as well as multilateral organizations (e.g., the African Development Bank), on governance issues in Africa and has appeared on several domestic and international news programs to discuss elections, corruption, sustainable management of natural resources, including water, and various governance-related issues in Africa.