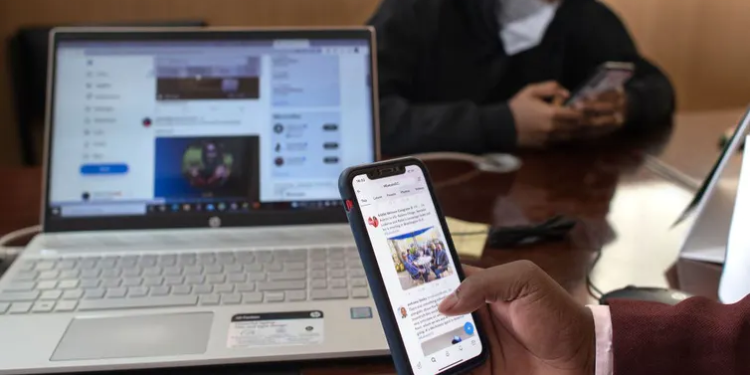 This has undermined their capacity to facilitate fair and open debate, most evidently during elections.

Social media platforms have exploited this trust deficit, acting as important alternative sites for political deliberation. But they have also become powerful tools for disinformation and misinformation.

Platforms like Facebook, Twitter and WhatsApp are reframing democracy, and the way citizens engage and organize in digital space. Through these platforms, politicians can engage directly with voters, which is especially important for independent candidates, who may not have the backing of a major party.

Reflecting the growth in the power of the internet, many governments have moved to regulate it – or even shut it down. Ethiopia, Cameroon, Uganda, the Democratic Republic of Congo, Republic of Congo, Chad, Sudan, and Zimbabwe have all used internet shutdowns to try to limit free expression.

Kenya, which will hold a hotly contested election on 9 August 2022, has yet to order an internet shutdown.

The government has issued assurances that it will not do so.

Kenya’s media landscape is an important field of research and analysis – highlighted in this selection of previously published articles.

As Kenya heads towards elections, concerns about the outbreak of electoral violence tend to rise. Research has explored the question of how, when and why political elites encourage ordinary citizens to engage in violent conflict.

Newspapers, television, radio, and online platforms can inform perceptions of what’s at stake in elections. Media narratives, in other words, can offer an early sign of the risk of violence.

There is no evidence that disinformation and misinformation practices can on their own influence the outcome of elections. Still, they pose a danger to democratic processes.

In politically charged environments, such as Kenya’s, they have the capacity to exploit long-held divisions with the potential to trigger violence.

It is evident that those with political power and money can easily hire automated systems, like bots, to influence the flow of political content across social media.

They can also distort information.

Social media has the potential to allow for more direct communication between politicians and citizens. But an analysis of candidates’ tweets in the 2017 election does not suggest that Twitter democratized political discourse in Kenya. While candidates in the upcoming election will continue to expand their reach and visibility through social media, Twitter may not yet replace patronage networks and traditional campaigning.

Political debates have become part of the election calendar. Their stated intention is to give citizens the information they need to decide whom to elect.

But debates are held at the end of an election season. They cannot replace the electorate’s need for the granular, mundane, day-to-day information about candidates and what they stand for.

Julius was previously managing editor of a number of Kenyan national daily and weekly newspaper titles under the Nation Media Group and The Standard Group in Nairobi, among them the Saturday Nation. He was the founding editor of Drum East Africa magazine and has also worked as a senior editor in Tanzania.

Ruto: We Are Confident in IEBC