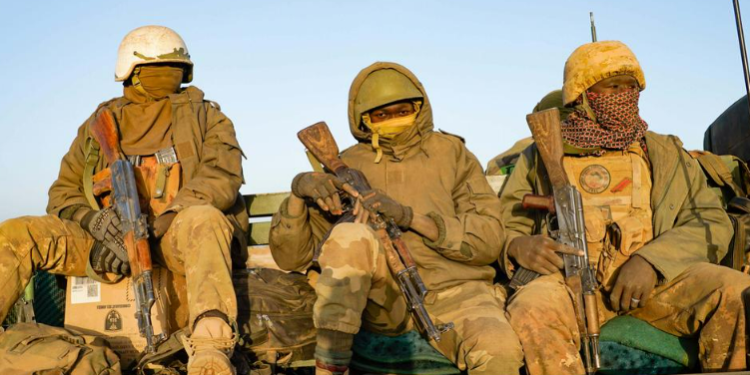 Undeniable fact is that Africa’s G5 Sahel (Burkina Faso, Chad, Mali, Mauritania and Niger) and Central African Republic (CAR) have bartered their natural resources for Soviet-era and Russian military weapons and equipment. The G5 Heads of State are currently struggling against growing terrorism in the region and needed support from external countries.

As well-known, Moscow is broadening its geography of military diplomacy covering poor African countries and especially fragile States that need Russia’s military assistance. As part of its foreign policy, the authorities have been strengthening military-technical cooperation. These often include officer training and the sale of military equipment, though the details are rarely publicly available. It has signed bilateral military-technical cooperation agreements with more than 20 African countries, according to several reports.

The Stockholm International Peace Research Institute reported in December that Russia accounted approximately $14bn of the volume of major arms supplied to sub-Saharan Africa. These are done through the state intermediary agency Rosoboronexport.

Stockholm’s report further explains that the military deals with Africa are going strong, political ideology is not a significant factor, and the focus is partly to counter Western and European interests in Africa.

In an interview discussion, Professor Dmitri Bondarenko, Deputy Director of the African Studies Institute of the Russian Academy of Sciences in Moscow, said: “With African countries, the primary aim now for Russian business is to regain a competitive edge in the global arms trade, and what’s interesting today is that the approach is not ideological but very pragmatic – you pay, we ship. It’s simply business and nothing more.”

As expected, Russia is delivering in order to achieve its aim of boosting appreciable revenue from arms sales and to halt French domination. Russia is fighting what it referred to as “anti-colonialism” and engages in fierce political confrontation against Western and European players on the continent. Several reports say Russia considers the growing colonial tendencies on the continent as a barrier and therefore sets to confront rather than cooperate in development initiatives there.

During the fourth quarter of 2022 and this January, a number top politicians from Burkina Faso, Chad, Central African Republic and Mali visited Moscow. Russian Special Presidential Envoy to the Middle East and Africa Mikhail Bogdanov said during the meeting with CAR Prime Minister Felix Moloua at the Russian Foreign Ministry that Moscow was ready to further assist in stabilizing the situation in country.

“The Russian side expressed readiness to further assist the efforts of the Central African leadership on stabilization of the situation in the country, both on the bilateral basis and as a permanent UN Security Council member,” the Russian Foreign Ministry said in a statement. The sides reportedly had an involved and trustful exchange of opinions on priority issues of further development of Russian-Central African relations.

On January 19, 2023, AFP reported that Mali’s military rulers received more warplanes and helicopters from Russia, the latest in a series of deliveries from its new top military and political ally. AFP said it counted eight planes and two helicopters at a ceremony attended by Russian Ambassador Igor Gromyko and the Head of Mali’s junta, Colonel Assimi Goita.

Mali’s military said the shipment included Sukhoi Su-25 attack planes designed to support ground troops; and the Czech-designed Albatros L-39. The L-39s, while initially designed for training purposes, have also been used as attack aircraft. Bamako also received Mi-8s, a Soviet-designed Russian transport helicopter that, as well as transporting troops and equipment, can be fitted with weapons to defend ground troops. The previous deliveries were made in March and August, 2022.

Ukrainskaya Pravda reported mid-January that Moscow was broadly using military-technical cooperation strategy to gain stature and influence in African countries, and that the Wagner Group, Russian private military company, the makes millions in Africa to finance war against Ukraine. It quoted from Politico which also cited a Western official and a diplomatic cable it recieved. Details: Over the past year, the Wagner Group has significantly expanded its operations in the Central African Republic, where mining profits could grow to nearly $1 billion, the news outlet’s sources said.

In June 2022, The New York Times also reported that the Wagner Group, led by oligarch Yevgeny Prigozhin, was mining gold in Sudanese mines to illegally replenish Russia’s gold and foreign exchange reserves and soften the effect of Western economic sanctions on the Russian economy.

According TASS, the local Russian News Agency, the Russian embassy in the Republic of Chad warned in communique this January that attempts to undermine Russia-Chad dialogue doomed to fail, and further emphasized the provocative nature of the statement from the Chadian rebels, aimed at casting a shadow on the successfully developing Russian-Chadian cooperation.

The embassy pointed out that this video is “part of a broader campaign, launched on the Internet, to discredit the Wagner PMC in the eyes of African governments, creating a significant obstacle to advancing political and business interests of some major players in Africa. It also noted that there are indeed insurgents on the Chadian-Central African border who pose a threat to the Chadian authorities.

“The provocative nature of the statement from the Chadian rebels, aimed at casting a shadow on the successfully developing Russian-Chadian cooperation, is also becoming evident. In this regard, the Embassy states that attempts to introduce elements of mistrust into the political dialogue between Moscow and N’Djamena will be doomed to failure, no matter who they come from,” the embassy emphasized.

Chairperson of the African Union Commission, Moussa Faki Mahamat has reiterated the necessity of creating regional forces for fighting terrorist groups, but added that the African armies are still under-equipped.

Mozambican President Filipe Nyusi was very outspoken, shared valuable experiences about the use of well-constituted regional military force for enforcing peace and security in Mozambique. Creating regional military forces to fight threats of terrorism will absolutely not require bartering the entire gold or diamond mines for the purchase of military equipment from external countries.

Now, Mozambique has relative peace and stability after the 16-member Southern African Development Community (SADC) had finally approved the deployment of joint military force with the primary responsibility of ensuring peace and stability, and for restoring normalcy in the Cabo Delgado province, northern Mozambique.

The South African Institute of International Affairs (SAIIA) has published a special report on Russia-Africa. The report titled – Russia’s Private Military Diplomacy in Africa: High Risk, Low Reward, Limited Impact – says that Russia’s renewed interest in Africa is driven by its quest for global power status. Few expect Russia’s security engagement to bring peace and development to countries with which it has security partnerships.

While Moscow’s opportunistic use of private military diplomacy has allowed it to gain a strategic foothold in partner countries successfully, the lack of transparency in interactions, the limited scope of impact and the high financial and diplomatic costs exposes the limitations of the partnership in addressing the peace and development challenges of African host countries, the report says.

That report was based on more than 80 media publications dealing with Russia’s military-technical cooperation in Africa. He interrogates whether fragile African states advance their security, diplomatic and economic interests through a relationship with Russia.

The report explained the dimensions of Russian power projection in Africa, new frontiers of Russian influence and provided a roadmap towards understanding how Russia is perceived in Africa. It highlighted narratives about anti-colonialism and described how these sources of solidarity are transmitted by Russian elites to their African public. For seeking long-term influence, Russian elites have oftentimes used elements of anti-colonialism as part of the current policy to control the perceptions of Africans and primarily as new tactics for power projection in Africa.

In the context of a multipolar geopolitical order, Russia’s image of cooperation could be seen as highly enticing, but it is also based on illusions. Better still, Russia’s posture is a clash between illusions and reality. “Russia, it appears, is a neo-colonial power dressed in anti-colonial clothes,” says the report.

The political changes, economic developments in relation to foreign players in these African countries are being observed and monitored closely by the the regional organization – the Economic Community of West African States (ECOWAS), the continental body – the African Union (AU) and the Security Council of the United Nations (UN).

Kester Kenn Klomegah is Guest columnist at the Kenya Times and an independent researcher, including being a policy consultant on African affairs in the Russian Federation and Eurasian Union. He can be reached at kesterkenn@yahoo.com

Berlin Says Goodbye to Part of Germany’s Colonial Past