Change of Guard in Kenya: The 5 Reasons Neighbours Watch Every Step 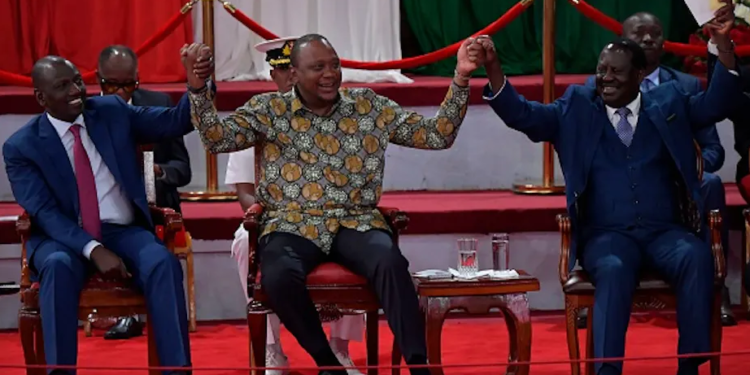 Kenya’s President Uhuru Kenyatta – whose final term in office ends after the 9 August polls – has been a key figure in east Africa. Over the last nine years, he has tried to create markets and address issues like peace, malaria, and climate change.

Within the East African Community, he signaled the end of an era on 21 July when he handed over the bloc’s leadership to his Burundian counterpart, Evariste Ndayishimiye. International relations scholar Nicodemus Minde explores five reasons neighboring states follow the change of guard in Nairobi very keenly.

Kenya’s democratic trajectory has always been viewed by east African neighbors as the bellwether for being fairly participatory. The annulment of President Kenyatta’s electoral victory on 1 September 2017 also offered crucial lessons to neighbors.

As court reversed Kenyatta’s win, John Magufuli (Tanzania’s president at the time) had banned all political party activities, ushering in an era of brutal dictatorship. In Rwanda, President Paul Kagame had just been declared winner with 98.8% of the votes.

In neighboring Burundi, President Pierre Nkurunziza had controversially extended his stay in power through a “third term”. Over in Uganda, President Yoweri Museveni was just clocking 31 years in office and showing no signs of letting go.

The other East African Community member state, South Sudan, was still embroiled in a civil war.

Only Tanzania has enjoyed periodic transitions, albeit through the one-party dominant system.

Kenya has experienced many democratic transitions since the reintroduction of multiparty politics in 1992. Despite its ethnic cleavages, Kenyan elections have been competitive. In 2002, there was a transition from the independence party, the Kenya African National Union, to the opposition National Alliance Rainbow Coalition.

Since the 1990s, Kenya has been the only country in east Africa to transfer power smoothly from a ruling party to the opposition.

Kenya has always projected itself as a regional economic hub and an international political player. It has the largest economy in east Africa, almost double that of Tanzania and nearly three times that of Uganda.

Tanzania, which previously had lukewarm relations with Kenya, has benefited immensely from rapprochement between Presidents Samia Hassan and Kenyatta. Recent reports indicate that bilateral trade hit US$905.5 million in the first 11 months of 2021 as their trade relations improved.

Kenya’s bungled 2007/8 political transition came as a surprise to many regional traders whose transit goods were destroyed along the transport corridor. The Northern Corridor and the Lamu Port-South Sudan-Ethiopia-Transport Corridor that run through Kenya are designed as key commercial arteries for landlocked countries in the region.

In February this year, presidential candidate William Ruto made a diplomatic gaffe when he said the DRC did not have a single cow. He was speaking about Kenya’s dairy and beef investments.

The DRC became the seventh member of the East African Community in April this year. President Kenyatta has steered the regional agenda, including the admission of the DRC.

In June he hosted the east African leaders to discuss the tensions between Rwanda and the DRC. He has also taken political leadership in stabilizing Somalia and South Sudan.

The neighboring states may wish to have as Kenya’s next president a person who continues to seek solutions to the conflicts of the region.

5. An ally as Kenya’s president

Who do the east African leaders want to be Kenya’s next president? Today’s personal friendships can be used to advance or safeguard bilateral interests tomorrow. In July 2021, Museveni hosted Ruto as the chief guest when laying the foundation of a new vaccine facility. Museveni’s action was interpreted as an endorsement for Ruto.

Museveni has had a tepid relationship with Odinga since 2007 when Odinga’s supporters uprooted the railway line during the post-election violence, disrupting exports to Uganda.

In an apparent attempt to heal old wounds and appear even-handed, Museveni hosted Odinga in May this year. The two later said they discussed ways of strengthening relations between Kenya and Uganda.

Odinga had flown to Uganda from South Sudan, where, as the African Union High Representative for Infrastructure Development, he had gone to commission a 3.6km bridge that will connect Juba to the rest of the east Africa region.

He was received there by President Salva Kiir. At the event, Odinga talked of his presidential bid, pledging to reopen the troubled border with South Sudan and prioritize construction of a Mombasa-Juba highway, if he won the 9 August elections.

President Kenyatta had in May 2018 appointed Odinga as his special envoy to South Sudan in the effort to reconcile Kiir and his vice-president, Riek Machar.

In Tanzania, the late Magufuli was a key ally of Odinga’s, thanks to a friendship forged when both were works ministers in their countries. Magufuli’s support for Odinga against Kenyatta in the 2013 and 2017 polls led to a perfunctory relationship with Kenyatta and tense relations between the two countries.

His successor Hassan was quick to restore friendly terms. But Tanzania, just like Rwanda and Burundi, has not shown any signs of leaning towards one candidate. Many Tanzanians have however been excited by rank outsider George Wajackoyah’s eccentric promises.

Dr. Nico Minde is an adjunct lecturer in International Relations at the United States International University – Africa (USIU – Africa) Nairobi, Kenya. He holds a Master’s Degree in International Relations from the same university. His PhD research was on the Endurance of One-Party Dominance: The Chama Cha Mapinduzi (CCM) Party and the Challenge of democratizing the Tanganyika-Zanzibar Union. He was a joint recipient of the Africa Peacebuilding Network (APN) Research Grant with Professor Kenneth Omeje in 2013. He is a beneficiary of the Next Generation Social Sciences in Africa Doctoral Dissertation Fellowship (2017-2020). His research interests are in Foreign Policy, Peace and Conflict in the Horn of Africa region, Political Parties and Democratization, and the political history of Tanzania and Zanzibar.