Political Debates Are Not Job Interviews 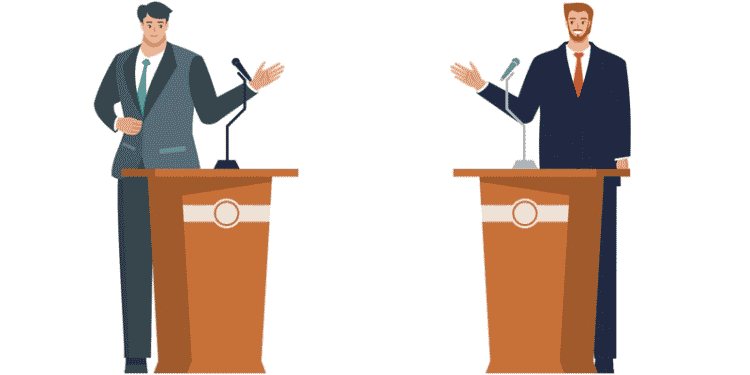 Political debates are considered a key part of campaign outreach in many democracies as early as 1920’s. A leaders’ debate or presidential debate is a public debate held during a general election campaign, where the candidates for public offices of Senate or National and Country assemblies expose their political opinions and public policy proposals, and criticism of them, to potential voters.

They are normally broadcast live on radio, television, and the Internet. The events may be organized by media corporations or non-government organizations.

Precursors to television debates were the candidate forums broadcast over radio in elections in the 1920s. The success of early televised debates such as the 1960 American presidential debate between John F. Kennedy and Richard Nixon, viewed by 70 million people, would eventually spur the desire to hold similar, televised debates in countries under the parliamentary system.

The 2019 Ukrainian presidential election innovated a new approach to the concept of a leaders’ debate, where now-president, then-candidate Volodymyr Zelensky proposed to hold debates publicly in the country’s largest stadium, the Kiev Olympic Stadium.

After much negotiation, the debates were held 48 hours before the election between then-president Peter Poroshenko and Zelensky, in front of nearly 30,000 spectators.

While political debates are often considered an integral part of campaigns, little evidence exists on the impact of debates on voters and candidates.

Debates serve to reveal information about candidates’ policy positions, their qualifications and competence, and their personalities.

For multi-party electoral races, debates allow both incumbents and challengers an opportunity to represent themselves.

Moreover, by creating a public record of their pre-election commitments, debates may increase the subsequent accountability of candidates successfully voted into office.

The exact format for a leader’s debate varies, but normally the debate will begin with each leader making a short opening statement. Then a panel of well-known journalists will ask sets of prepared questions, which are to be answered either by all of the leaders or by one specific leader.

After the leader(s) answer each question, the other leader(s) may get a chance to make a brief response, after which there may be some time allocated for an often heated “free for all” debate.

The moderator will usually attempt to exercise some control through all of this, and then stop the debate after time has elapsed so the next question can be asked. After the panelists finish asking questions, each leader will make his or her closing remarks and the debate will end.

However, a leaders’ debate is not technically a candidate’s job interview. An interview is a structured conversation where one participant asks questions, and the other provides answers.

That information may be used or provided to other audiences immediately or later.

While debates impact voters’ political knowledge and voting decisions, and also cause candidates to invest more in their constituencies, during interviews candidates strive to perform well to increase the likelihood of them receiving a job offer.

I am sure now you know what the recent presidential events were or were not.

But then again, that is debatable.

I. Coast, Ghana Ease Tug-of-War with Buyers Over Cocoa Prices

US sanctions on Zimbabwe’s elite ricochet across economy