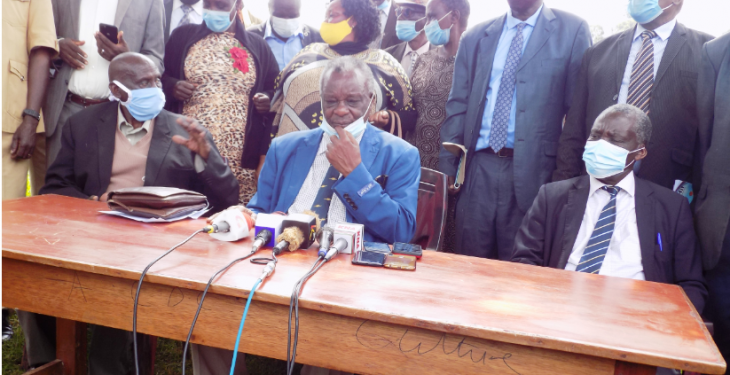 872
SHARES
2.4k
VIEWS
Share on FacebookShare on TwitterShare on WhatsApp

The Gusii Council of Elders on Thursday called for a truce between Kisii Governor James Ongwae and Interior Cabinet Secretary Fred Matiang’i.

The governor denied the claims, saying he was only having a dinner with ODM party political leaders-Sam Ongeri, Janet Ongera and Pamela Ochieng – when armed police stormed his house.

Speaking to journalists at their office on Thursday, elders chairman, James Matundura , said they want the two to reconcile.

The community, he said, cannot afford to see acrimony reign between the CS and the governor over something they can iron out on their own.

Matundura spoke of the need for amity, saying it would help foster unity and spirit of togetherness.

“It is not our interest to know the nitty-gritties of what caused the differences, but it definitely in our interest to see the community leaders united,” said Matundura.

“Our urgent message is that they come together and work as brothers.”

He said as the Council of Elders, they would not want to allow the two to read from separate scripts.

Council Secretary Samuel Angwenyi said that the political heat generated during the recently held Bonchari Constituency by-election should be calmed.

Florence Manduku, a member of the council, said they would soon meet the two leaders and reconcile them.