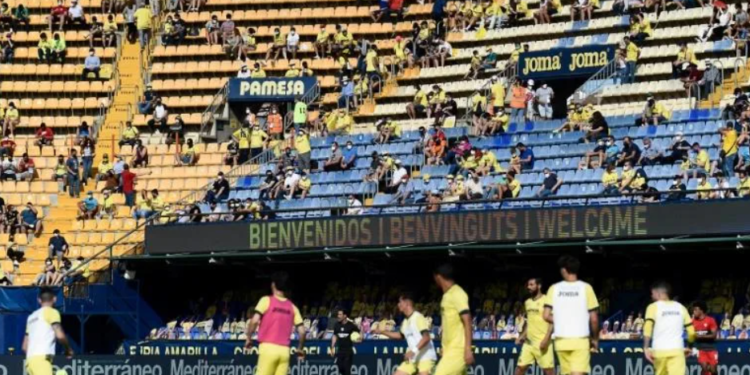 After more than a year away, fans finally returned to La Liga on Sunday when small crowds were allowed into two matches in the Valencia region in the penultimate round of games.

In Valencia, the Mestalla stadium opened its doors to 3,000 fans for the match against Eibar while 60 kilometres (37 miles) up the Mediterranean coast Villarreal welcomed 5,000 season ticket holders for a clash with Sevilla.

The return of fans in Spain for the closing rounds of La Liga was announced by Spanish Minister of Culture and Sports, Jose Manuel Rodriguez Uribes on Wednesday.

But the turnstiles can only be opened in regions where the Covid-19 infection rate is less than 50 cases per 100,000 inhabitants. Crowds are limited to 30 per cent of stadium capacity and a maximum of 5,000.

On Saturday 22,000 spectators were allowed to attend Leicester’s 1-0 FA Cup final victory over Chelsea at Wembley, although league games in the UK were still held behind closed doors.

It had been 442 days since the last match at the Mestalla in front of fans, a Valencia home victory over Betis on February 29 last year.

Each fan had to undergo a temperature check before entering the stadium and wear medical-grade FFP2 masks inside. They had to maintain safe distances from each other and smoking and eating in the stands were forbidden.

Valencia tweeted a video showing fans queueing outside the ground, having their temperatures taken and repeatedly using hand sanitizer.

“These are the arrivals that we were most looking forward to seeing again in the Mestalla,” said the caption.

Villarreal tweeted a video showing fans scattered round their Estadio de la Ceramica with the caption: “What a feeling it is knowing that you’ll be waiting for us when we take to the pitch!”

With crowds supporting them, the home teams quickly gave their fans what they wanted to see. Valencia raced into a three-goal lead in 30-minutes against bottom side Eibar.

All 10 matches on the penultimate day kicked off at 1630 GMT.

The three teams battling for the title were all playing behind closed doors.

With almost 80,000 deaths and more than 3.5 million cases, Spain is one of the European countries most affected by the Covid-19 pandemic, but the infection rate has been falling steadily for several weeks.