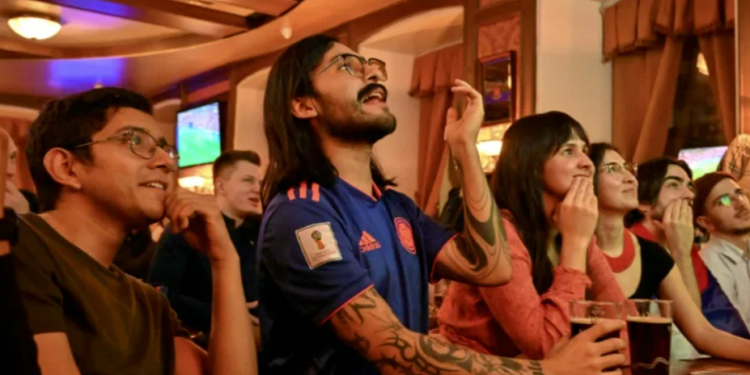 At a bustling Moscow bar, football fans wearing red, white and blue are glued to the TV screens as teams line up for the national anthems ahead of a World Cup match.

But this time the colors are not to represent the Russian flag. The country that in 2018 hosted the World Cup has this year been barred by FIFA from international football competitions in response to Moscow sending troops into Ukraine.

And with the Russian team absent from the championship hosted by Qatar, its fans have instead come to support Moscow’s ally Serbia.

“We have always supported them, and we will continue to support them: I think that the Serbs are a brother people,” Kirill Gnevuchev, a manager for a refrigeration equipment company, told AFP at a bar in central Moscow.

Gnevuchev had come with his friends on Thursday to cheer on Serbia’s team — nicknamed the “Orlovi” (the Eagles) — in their opening group stage match against Brazil, which Serbia lost 2-0.

Their next match will be against Cameroon on Monday.

While Serbia’s European neighbours have pummelled Russia with sanctions over the Ukraine offensive, Belgrade’s historically close ties with Moscow have remained largely unscathed.

And in this Moscow bar, unusually busy on a weekday, the conflict in Ukraine seems far away.

Young women cheer with a Serbian flag painted on their cheek; other fans discuss the match sipping on a cold pint while two bookmakers pass through the tables collecting bets.

“I bet on Brazil, but I support Serbia,” Roman Marshak, a 34-year-old professional poker player, told AFP with a smile.

“If Brazil wins, I win money. If Serbia wins, I’ll just be happy!”

Meanwhile bartender Roman Yanchinsky is glad to have such a crowd on a Thursday.

“It’s thanks to Serbia that we have a full house today,” the 41-year-old said.

According to a poll conducted mid-November by Russian sports news website Championat, Serbia is the favorite team among Russian supporters during the World Cup.

And in the absence of the Russian team, Russian sports commentators instead discuss the performance of Serbia’s strikers Dusan Vlahovic and Aleksandar Mitrovic.

“Good luck at the World Cup! We believe in your success, brothers!” the Russian national team said on its social media in a message in Serbian.

The chorus of supporters was joined by Rossotrudnichestvo, a Russian government agency for cultural exchange, which said in a statement: “Same colors, same faith. Go ours! Go Serbs!”

But despite the enthusiasm displayed for Serbia, the absence of Russia’s team is a reminder of how isolated the country has become, just four years after welcoming football fans from all over the globe as World Cup hosts.

Marshak regrets not being able to travel easily abroad after most European countries closed their airspace to Russian planes and many airlines halted flights to Russia and questions the future of Russian football after an exodus of foreign players.

“Maybe it will benefit young Russian talent. But no one in Europe will want to recruit them in this context,” he said.

‘We will come back’

Treated as a pariah on the diplomatic and sporting field, Russians can however count on the solidarity of Serbia.

On the day of the match, Russian fans unfurled a Serbian flag linked to a Russian one — several hundred metres long — carrying it through the streets of Russia’s second largest city.

Still, in a country where football is one of the most popular sports, Russia’s absence from the World Cup is painful.

“Sport should not suffer the consequences of politics,” Gleb, an 18-year-old humanities student, told AFP at the bar.

Marshak compares Russia’s situation to that of Yugoslavia, which was excluded from the Euro in 1992 and the World Cup in 1994 due to war in the Balkans but was later reinstated.

“We will come back too,” Marshak said.

“But as long as the current political situation persists, nothing will change. Today, sports and politics cannot be separated.”

Image of Twitter, One Month after Elon Musk's Eventful Takeover